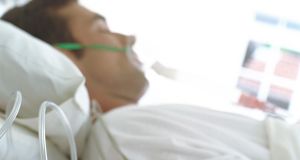 The number of patients dying in hospital after presenting with a heart attack has almost halved over the past decade, the first audit of hospital mortality rates has shown. File photograph: Vincent Hazat/PhotoAlto/Getty

The number of patients dying in hospital after presenting with a heart attack has almost halved over the past decade, the first audit of hospital mortality rates has shown.

The report looked at the difference between the number of patients who died from a condition in a particular hospital and the number that would be expected to die on the basis of the overall national rate and the patient profile of the hospital.

The report said that the results cannot be used to compare hospitals as “no two are expected to be the same” in terms of the patients they deal with.

There was “almost no change” in the rates for haemorrhagic stroke and chronic lung disease.

All hospitals were within the expected range for heart attacks, heart failure, ischaemic and haemorrhagic stroke.

One hospital, the Mater Misericordiae in Dublin, was outside the range for chronic lung disease, meaning more patients died than would be expected.

The hospital’s chief executive, Gordon Dunne, said the review had “not provided a definitive explanation . . . [but] neither has it raised any immediate concerns.

“It has, however, raised questions for further consideration,” he said.

“In exploring the data, we have concluded in general that the inclusion of palliative care-associated mortality has not significantly contributed to this change in mortality rate.

“The interpretation of coding of the primary admitting diagnosis from the clinical notes is challenging due to the complexity of presenting symptoms and existing co-morbidities,” he said.

Another issue arose in relation to the accuracy of reflecting the number and complexity of co-occurring diseases in patients and the significance of these in contributing to deaths.

He also said chronic lung disease “inherently leads to a bias in coding”, as it deflected from alternative diagnoses.

He said the situation would be “closely monitored” going forward.