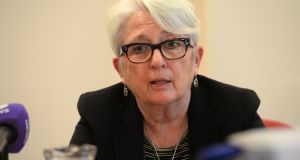 Report author Prof Susan O’Reilly: “Ireland is unique internationally in regard to the litigation environment and the potential for harm to its current and future screening programmes.” Photograph: Dara Mac Dónaill

Almost 400 women who have contracted cervical cancer will be entitled to a review by the CervicalCheck programme of their cases, according to the author of a report on the issue.

The review process, which is currently being planned within the Health Service Executive, is likely to start next year. Prof Susan O’Reilly, whose report last month recommended affected women be entitled to standardised, patient-led case reviews, said the process may take at least a year to complete.

CervicalCheck audits were stopped in the spring of 2018, after major controversy erupted when it emerged that hundreds of women had not been told the outcome of a review of their slides.

The issue featured in the recent court settlement agreed by the HSE and a medical lab with Patricia Carrick, whose cervical cancer was diagnosed in 2019, after auditing of slides in the programme was stopped.

Aontú leader Peadar Tóibín has claimed the case raised “very serious concerns” because Ms Carrick’s slides were not re-examined as part of a Royal College of Obstetricians and Gynaecologists (RCOG) review commissioned by the Government in 2018.

The RCOG review covered slides up to May 2018, but Ms Carrick’s cancer occurred after this date.

About 260 women a year develop cervical cancer, of whom 160 have participated in screening. Of these, 20-30 are interval cancers that arise between screenings, while the rest of the cancers are diagnosed under the programme.

Given that 2½ years have passed since audits were halted, Prof O’Reilly estimated that almost 400 women in total would be eligible for a review. The process would take some time due to the need to recruit additional staff and the complexity involved, she cautioned.

A separate anonymous “programmatic review” of cervical cancers that occurred in the programme is also being undertaken. The results of this review, which are being undertaken for educational, quality assurance and international benchmarking purposes, are not being shared with patients.

Ireland is an outlier internationally in relation to the way it handles audit information, Prof O’Reilly says. Out of 17 countries international that were surveyed for her report, just 11 audited their cervical cancer programme. Of these, only three informed patients of the result of the audit and, of these, only one write directly to the patients involved.

The HSE says it has set up implementation groups to work on establishing the process for case reviews and will report on progress next January.

Prof O’Reilly told The Irish Times the screening service was under “huge risk” due to the escalating number of legal claims it faces.

Before the 2018 controversy, there were 10 claims against the cervical cancer screening programme; by last June, this had risen to 185.

In addition, a UK review ordered after the 2018 controversy has generated 83 formal request to CervicalCheck for patient data, which may lead to more claims.

The resulting liability to the State could be in the range of tens of millions to hundreds of millions of euro, Prof O’Reilly warns in her report. “Since the 2019 operating budget of CervicalCheck was €34 million, such liability would render the programme unsustainable.”

In addition, the escalating number of cases is likely to tie down large number of highly qualified staff who would have to devote weeks to each case, thereby further undermining the time available to carry out screening, she said.

No screening test will ever find 100 per cent of abnormalities, the HSE pointed out. “Ireland is unique internationally in regard to the litigation environment and the potential for harm to its current and future screening programmes.

“It is accepted around the world that screening does not detect all cancers but that good quality-assurance processes maximise the number of abnormalities detected.

“Slides are already reviewed within laboratories if screeners have any doubts about a slide, and as part of regular quality-assurance processes.”

Since CervicalCheck started in 2008, the number of women who developed cervical cancer has fallen by 7 per cent a year. Of every 1,000 women screened, about 20 will have abnormal (pre-cancerous) cervical cells. Smear testing picks up 15 of these 20 cases on average but five people will not have cells found and may develop cervical cancer.

Under a new HPV screening method introduced this year, 18 out of every 20 cases involving abnormal cells are identified.