Dublin’s highest incidence in Blanchardstown and lowest is in Killiney 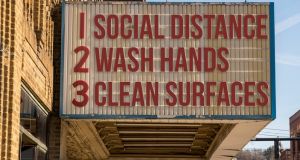 The overall national 14 day incidence rate as of Thursday is 202, a number that has continued to decline, although remaining relatively high. Photograph:iStock

Buncrana in Co Donegal has recorded the highest 14-day incidence rate of Covid-19 in latest data released by health authorities, while the lowest rate of infection was found on the Dingle peninsula in Co Kerry.

The data for the two week period from October 20th to November 2nd looks at the incidence rate of infection per 100,000 of population, giving a better understanding of rates than straight case numbers.

Buncrana recorded a rate of just under 595, down from 603.6 on October 26th Meanwhile, the Dingle Peninsula was the only local electoral area not to have a rate registered because it recorded less than five cases in the period.

In Dublin, the highest infection rate was recorded in the Blanchardstown / Mulhuddart area at 348. Other top areas in the capital included Swords (342), Ballymun and Finglas (329) , Ballyfermot and Drimnagh (26) and Clondalkin (260).

The data is recorded according to local electoral areas of which there are 31 in Dublin and a total of 166 on the table.

Ballyjamesduff in Co Cavan record an incidence rate of 1494.4 on October 26th is now at second highest but much decreased at 593.

The 14-incidence rate, so often mentioned by officials from the National Public Health Emergency Team (Nphet) has fallen. The overall national 14 day incidence rate as of Thursday is 202, a number that has continued to decline, although remaining relatively high.

On October 22nd, Dr Heather Burns, a deputy chief medical officer at the Department of Health, noted that the number had surpassed 300 for the first time - reaching 302 compared to just three at the end of June.

The latest data on Thursday shows other high ranking areas included Ratoath (543) and Ashbourne (502)in Co Meath and Galway City (east and west) (255 and 256).

Infection levels are at their most sparse in New Ross, Co Wexford (25); Carrickmacross, Co Monaghan (42); and Carrick-on-Shannon, Co Leitrim (44).