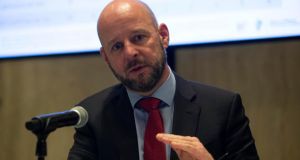 The Department of Health has closed down virtually all of the subgroups advising the National Public Health Emergency Team (Nphet) and “realigned” their work into Government departments.

Ten subgroups to Nphet, whose members included a range of experts in health and science, were stood down over the summer, the department has confirmed.

The decision was taken, it said, because “it was considered timely to move from reactive crisis management to a more strategic focus”.

Ironically, the trend of rising cases that has resulted in the current surge was beginning in July just as the subgroups were being stood down.

The only surviving subgroup is the Irish Epidemiological Modelling Advisory group, which forecasts future trends in cases and hospitalisations and is chaired by Prof Philip Nolan. This will continue its work “for the coming period” to help build up statistical and disease modelling capacity within the Health Protection Surveillance Centre, according to the department.

The department said “it was determined” last July and August that all of the subgroups to Nphet, aside from Prof Nolan’s, had met their original terms of reference.

“The subgroups were accordingly stood down and their work has since been realigned into the appropriate policy and operational functions of the Department of Health or other departments, organisations, or bodies.”

As previously reported, the expert advisory group to Nphet, which included scientific experts and a patient representative, was stood down at short notice in mid-July. Replacing it, the Health Information and Quality Authority (Hiqa) has established an expert advisory group with a broadly similar membership. This is not a subcommittee of Nphet.

A vulnerable people subgroup, which advised on policy in relation to nursing homes, people with disabilities and other at-risk groups, told Nphet in July it had met its objectiveness in terms of preparedness plans for vulnerable groups, according to the department.

It has been replaced by an oversight group of civil servants from relevant departments.

The department said the acute hospitals preparedness subgroup was stood down in June and its work integrated into the “ongoing day-to-day engagement” between the department and the HSE. The group agreed to reconvene “as and when required, should the situation change”.

A behavioural change subgroup, which ended its work in July, has been replaced by a “communications and behavioural advisory group” advising the department directly.

The department said the activities of a guidance and evidence synthesis subgroup to Nphet have been “operationalised back into the agencies that have responsibility for them”.

Another subgroup on health legislation has been stood down after meeting only once since it was set up. Also stood down were the medicines and medical devices criticality assessment subgroup, a pandemic ethics advisory group, a health sector workforce group and a diagnostic testing approaches group.

*This article was amended on November 4th to correct an error.