An expert on the whale we featured, plus readers’ nature queries 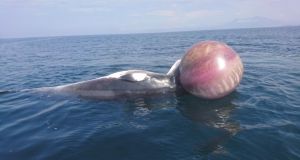 On June 23rd you showed a photograph of a whale taken off Galway. I can tell you that it was a minke and that its tongue had inflated following decomposition. – Dr Simon Berrow, IWDG, Celtic Mist, Seyðisfjörður, Iceland

I spotted the butterfly in my photograph in mid-June in Kildare. – Robert Corrigan, Castledermot, Co Kildare
It is a cinnabar moth, whose larvae feed on ragwort.

I found this little guy dead on the floor of my car after my son and I had walked in a forest. – Marie MacSweeney, Drogheda, Co Louth
It was a brindled hoverfly, also called a sun fly. It’s found near water but also wanders widely.

During the heatwave a blackbird splayed out its wings and lay poleaxed on our deck, beak open and completely stationary. A robin also did the same thing. – Orla Farmer, Enniskerry, Co Wicklow
Blackbirds frequently sunbathe. It helps spread preening oil through the feathers and drives parasites out. The open beak helps cool them down. Robins also sunbathe.

These are the cygnets, with their parents, hatched by the swan featured on her nest by the Dodder in Eye on Nature on May 5th. – Ronan Copeland, Sandymount, Dublin

This unusual web may be the work of the ermine moth and caterpillar. – Jim Parker, Newbridge, Co Kildare
The caterpillars look like those of the orchard ermine, Yponomeuta patella, which protect themselves with these webs. They have been reported to the National Biodiversity Data Centre on the Dublin-Kildare border.

We had several visits from this bumblebee and were wondering if the marking on its thorax is natural or man-made. – Marie Hannon, Bray, Co Wicklow
It is the common bumblebee, Bombus terrestris, which has been visiting many flowers and got daubed with pollen.