What species is this pink grasshopper: Readers’ nature queries 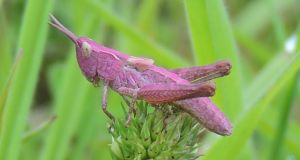 I found these little guys on Portmarnock beach. They were about the size of a walnut. Are they jellyfish? – Ellie McCarthy, Dublin 5
They are sea gooseberries, comb jellies, a different family to the jellyfish. They do not have a sting and are common around our waters, particularly in summer.

I noticed this growing like a parasite on a wild rose. – Liam McNamara, Moycullen, Co Galway
It’s called rose bedeguar gall, also robin’s pin cushion. The gall wasp lays a large number of eggs in the leaf bud, which cause the distortion.

We think this is a cuckoo’s egg in a robin’s nest. The robin had rolled it out but it must have rolled back in again. When I checked later the egg was gone. Is July 1st not too late for a cuckoo to lay an egg? – Patrick Molloy, Bunratty, Co Clare
A cuckoo can lay up to 20 eggs in a season and she times her laying to the laying time of the host bird.

I saw this strange growth on the leaves of a lime tree in the college, is it a parasite? – Georgina Ward, Maynooth, Co Kildare
These growths are caused by tiny lime nail gall mites secreting chemicals into the leaf. The mites then suck sap from the galls.

There were three sightings of ruby-tail wasps, identified as Chrysis ignita. Although they possess a sting it is rarely used. They are parasites of solitary wasps and bees. This photo was sent by Simon Mills, Glenageary, Co Dublin.