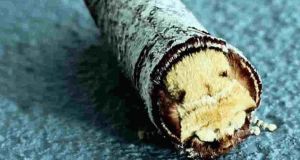 I thought this was a twig that somehow got stuck on the wall. On closer inspection it revealed itself as, I assume, a moth.
Darryl Broe, Corca Dhuibhne, Co Chiarraí
It’s the buff-tip moth, which looks like a twig when resting.

I saw this insect in my garden hovering over flowers with its long proboscis, and then quickly flying away. I have not seen it before.
Kevin McCartan, Kilkenny

It’s the dark-edged bee fly, Bombylius major, not noticed very often but widespread when we get time to look. Harmless.

This green insect with long transparent wings alighted on my window. It was 2-2.5cm in length from the head to the tip of the wing.
Philip Marron, Raheny, Dublin 5

It’s the green lacewing, very useful in the garden as it feeds on aphids.

Can you identify this little flower that grows in our field. Is it an orchid?
James Gallagher, Dungloe, Co Donegal

This is the photo of a peculiar fungus on a dying mahonia tree. I wonder what it is.
Billy Linehan, Castleknock, Dublin 15

It is called jelly ear or wood ear, Auricularia auricle-judae.

This larva of a dragonfly (identified earlier) attached itself to my table. We put the table outside and we watched it emerge for hours. Do you know its name?
Linda and Arva Quinlan, Blackrock, Co Dublin

According to Ireland’s Dragonflies by Brian Nelson and Robert Thompson, that was the first form of the amber-winged hawker as it emerged from the larva case. The adult dragonfly has a brown body and brown eyes with a reflection of blue (male) or yellow (female).

Another Life: Ireland’s saltmarshes could vanish as sea level rises
Level 5 lockdown to remain until March 5th with series of new Covid restrictions