Global leaders agree to scale up response to biodiversity collapse 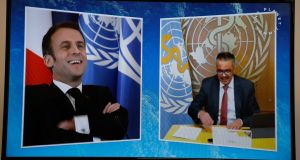 More than 50 countries have committed to protecting at least 30 per cent of the world’s land and oceans by 2030 in an attempt to halt a global biodiversity crisis.

The commitment to prevent mass extinctions while ensuring clean air and water was made at the One Planet Summit (OPS) staged virtually on Monday, and hosted by French president Emmanuel Macron.

A growing body of scientific research has shown that half of the planet must be kept in a natural state to address the dual crises of climate change and biodiversity loss, with an interim goal of a minimum of 30 per cent protection by 2030, according to the new coalition, which includes Ireland.

The summit brought together heads of state and government as well as leaders of international organisations, financial institutions, the business sector and NGOs.

It was staged to highlight the unfolding collapse of biodiversity taking place in tandem with climate disruption, with a view to paving the way for a “global deal for nature’, to be ratified in China at a “conference of parties” later this year under the UN Convention on Biological Diversity.

It was also billed as an opportunity to raise ambition on protection of nature, while responding to new issues raised by the Covid-19 pandemic.

Mr Macron said the solutions to degradation of land and marine ecosystems and species loss were found in nature when fighting climate change, reforming agriculture, in stabilising ecosystems and securing public and private involvement.

He said no global biodiversity target was currently being met. If protection of land and seas was not achieved, “we won’t be able to realise climate commitments”.

Costa Rican minister of environment and energy Andrea Meza said: “Protecting 30 per cent of the planet will undoubtedly improve the quality of life of our citizens, and help us achieve a fair, decarbonised and resilient society.

“Healing and restoring nature is a key step towards human wellbeing, creating millions of quality green and blue jobs and fulfilling the 2030 agenda, particularly as part of our sustainable recovery efforts.”

The OPS was dominated by consideration of how best to protect land and marine ecosystems; moving to sustainable agriculture, mobilising finance for biodiversity and greater protection of tropical forests.

Delegates backed acceleration of the Great Green Wall in Sub-Saharan Africa, with Mr Macron announcing €14.3 billion in global support for the project.

Governments undertook to collaborate more to prevent future pandemics “through the fight against deforestation and the prevention of risks related to our contact with wild species”.

Minister of State for Heritage Malcolm Noonan confirmed Ireland was among te countries which have formed the “high ambition coalition [HAC] for nature and people” .

He said reversing biodiversity loss was a major challenge for the coming decade.

“It is a social and economic challenge that requires a profound transformation of value chains, business models and patterns of human behaviour and consumption. This challenge requires concerted action across sectors of society at all levels.”

Covid-19 had challenged the scope and ability of countries to act collectively for nature and biodiversity, Mr Noonan said.

“It has also, however, led to a re-evaluation of humanity’s relationship with nature, particularly in the context of how future zoonotic pandemics can be avoided. Facing up to and addressing the damaging loss of biodiversity is vital if we are to do this.”

Prince Charles launched an ambitious charter at the summit to encourage the private sector to safeguard the planet by adopting sustainability and an initiative to invest $10 billion – to be raised by 2022 – in “natural capital”.

He urged industry and business leaders to sign up to a 10-year project putting “nature, people and planet at the heart of global value creation”.

Called Terra Carta, or Earth Charter, it will lay out a “recovery plan” towards sustainability that gives fundamental rights and value to nature.

“Sustainability is a choice. If we make it a part of our core values it will define our purpose, determine our choices and drive our actions,” he told delegates.

Funds are to be invested in companies and projects providing solutions to preserve and restore natural capital – renewable and non-renewable resources such as clean air and water and fertile soils. Initiatives could include reforestation or landscape restoration as a means to reduce emissions, restore biodiversity, and boost sustainable economic growth, he said.

The Irish Wildlife Trust (IWT) said it was important to see this level of Irish ambition, “but it must be coupled with a review of why we are failing in existing ‘protected’ areas, and how we are going to do things differently to reach this target”.

In Ireland “protected” areas currently cover only 13 per cent of land and 2.5 per cent of sea, it noted.

He added: “We’ve had 40 decades of talking so we really need to start acting in a way that reflects the state of emergency declared by the Dáil nearly two years ago. We’re still waiting on delivery of commitments made in the 1990s and 2000s which were to have seen extinction and pollution as a thing of the past. Yet our extinction crisis is only deepening.”

The IWT said Ireland must set out how it will reach the ambitious new goal of protecting 30 per of land and sea by 2030 in a way that fosters local and community stewardship of the natural environment.

“We also call on him to urgently deliver on commitments made in the programme for government including commencing the review of the National Parks & Wildlife Service and publishing the expert report on MPAs which has been on his desk since last October,” Mr Fogarty said.

Social Democrats spokeswoman for climate action and biodiversity Jennifer Whitmore acknowledged Ireland was sending out a strong message of intent by joining HAC.

“We have been a laggard when it comes to environmental protection...even our six national parks are not currently managed for positive biodiversity outcomes and none has management plans in place,” she added.

“We need more than just ‘paper parks’. Any land or marine that is set aside for protection must be actively managed for biodiversity benefits.”

Responding to the Terra Carta initiative, Rachel Owens, head of corporate accountability at Global Witness, said: “The Prince of Wales is absolutely right to pinpoint corporate activity as one of the main drivers of climate change. We know just 100 corporations are responsible for 71 per cent of global emissions.

“In their hurried dash for quick profits and unsustainable growth, companies are leaving a trail of devastation and disaster. They are responsible for the toxic waste, air pollution and mass deforestation destroying our planet and hurting communities across the world, from the Niger Delta and the Amazon rainforest to Richmond in California, ” she said.

Action to promote sustainability across business sectors was necessary, she said, but this initiative would need to prove it goes beyond meaningless voluntary initiatives that have failed to stop corporate abuse.

“It must go beyond ‘greenwashing’ and PR spin to include clear and measurable commitments, as well as consequences for corporate inaction, to phase out some of the most damaging industries, particularly ongoing fossil fuel extraction, and end the destruction of climate-critical forests, including, importantly, ending the financing of these projects by global financial institutions.”