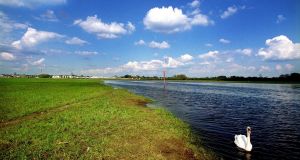 The report found biodiversity was in serious decline, with freshwater habitats identified as having the fastest biodiversity loss of all ecosystems. Photograph: Bryan O’Brien

The EPA’s call for a decade for action to address Ireland’s pressing environmental issues, that range across many sectors, has been strongly backed by a statutory body which advises the Government on enhancing water resources.

An Fóram Uisce (AFU) welcomed the EPA recommendation in its latest evaluation of Ireland’s environment that a “national environmental policy” be put in place to achieve short, medium, and long-term goals “for protecting and improving our cherished environment for future generations”.

Protecting and improving the state of Ireland’s water environment was particularly urgent in that context, said AFU chairman Dr Tom Collins. “The urgency of this cannot be understated. We, together, must act and act fast to improve and preserve our aquatic environments for ourselves and our future generations.”

Ireland’s Environment: An Integrated Assessment 2020 found “enduring and systemic challenges are putting pressure on the environment and remain to be solved”. These cut across different environmental topics such as climate, air, soil, water, biodiversity and waste, and across organisations and sectors, business and all levels of society.

“Almost half of Ireland’s rivers and lakes are failing to achieve good quality status - a legal requirement of EU legislation. The number of our pristine rivers has declined catastrophically, from over 500 rivers to the current 20,” he pointed out.

Biodiversity was in serious decline, with freshwater habitats identified as having the fastest biodiversity loss of all ecosystems, he said. “Water is the lynchpin for life on this island, supporting how and where we live, our food systems, our recreation and, ultimately, our health.”

“Almost half of Ireland’s rivers and lakes are failing to achieve good quality status – a legal requirement of EU legislation. The number of our pristine rivers has declined catastrophically, from over 500 rivers to the current 20,” Dr Collins pointed out.

Green ministers have issued a joint statement defending actions being pursued by the Government to address the climate and biodiversity crises facing Ireland.

Ministers Eamon Ryan, Pippa Hackett and Malcolm Noonan were responding to the findings of an EPA report published this week on the state of the Irish environment.

It concludes the outlook for Ireland’s environment is “not optimistic”, unless implementation of solutions across all sectors of society is accelerated over the next decade.

Having delivered “the most ambitious programme for government ever on climate action and biodiversity”, the ministers said it added up to the “policy shifts” needed to turn the environmental crisis around.

Minister for Environment, Climate, Communications and Transport, Eamon Ryan admitted the report was “a stark and timely reminder of what we need to do to tackle the climate, water and biodiversity crises we face”.

“We are already making progress, with a new climate bill about to set binding emissions targets, and substantial budget 2020 increases in areas from retrofitting to public transport to biodiversity. We have also committed to developing a national land use plan,” he said.

He accepted there was more to do but the Green Party would ensure “environment and climate issues are at the heart of decision making and investment over the lifetime of this government”.

Minister of State for land use and biodiversity Senator Pippa Hackett said: “The EPA report highlights the need for environmentally-sustainable agriculture and I’m working with farmers to achieve that.”

Investment in horticulture and in supporting up to 500 farmers in converting to organic farming were helping agriculture address environmental issues.

“We have 23 European Innovation Partnerships schemes where farmers are working collaboratively, in groups, with ecologists and advisers to achieve better habitat management for hen harriers, for pearl mussels, in the uplands and on dairy farms. I want to see more of this kind of activity.”

She recognised forestry of the future must be multi-functional. “It must address climate action and deliver for biodiversity, for water quality, and for local communities. I’m appointing a forestry policy group, which will include more environmental NGOs than previously, to work on developing this new forestry model.”

Minister of State for heritage Malcolm Noonan said the report highlighted the scale of challenge facing the Government and all of society. The programme for government amounted to the national environmental policy advocated by the EPA, he said.

A new national biodiversity plan would come into operation in 2021, “setting ambitious targets for 30 per cent land and 30 per cent marine protection, with 10 per cent strictly protected as guided by the EU Biodiversity Strategy”.

He added: “I want to empower local authorities to lead on biodiversity and water quality through the development of an enhanced heritage division in each Council, an all-Island approach to biodiversity data gathering and conservation.”

The new all Ireland pollinator plan would “plot a way forward for all communities to become active participants and citizen scientists in conserving biodiversity”.