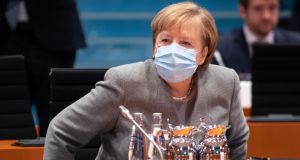 With her familiar helmet hair and hunched back, Angela Merkel is instantly recognisable as she walks into the International Court of Justice (ICJ).

It’s 2034, Germany is on trial for its failure to adopt climate-friendly policies, and the retired chancellor is in the firing line. An onlooker asks the 80-year-old former leader: “Can you sleep at night?”

This is the provocative opening of a German television film, Ökozid (Ecocide), shown on Wednesday night: whether the country, its people and politicians they elect can be held responsible tomorrow for the climate effects of their actions – and inaction – today.

In this scenario some of the 31 countries worst hit by the climate change  –  including Chad, Honduras and Bangladesh – have taken a case against Germany, demanding €60 billion in compensation, at the ICJ.

The court drama continues to unfold amid a backdrop of sweltering heat, public riots and fake news

The court is now based in Berlin after its complex in The Hague, like the surrounding low-lying Netherlands, was submerged in three flash floods.

With climate change now a palpable reality in the western world, too, the court case revolves around whether Article 6 of the Convention on Human Rights, guaranteeing the right to life, can be interpreted to also mean the right to an intact natural environment.

Lawyers for the federal republic dismiss the case as an “abuse of international law and an attack on democracy” in one of world’s most progressive climate change players. While Germany is on trial, one notes, leading polluters – the US and China – do not recognise the court and are immune to such legal action.

The star witness is Angela Merkel who, at 80, stands by by her climate record. She was the one who salvaged the Kyoto Protocol in 1997 while, in power, she ensured Germany met its own climate goals amid “considerable opposition”.

Back then, she said, Germany faced “unpredictable opponents who simply denied that human-made climate change existed, as well as opponents who prioritised their own special interests and refused to sign a negotiated agreement – and this when the effects of the crisis were already palpable”.

By the end of the film, somewhat unrealistically, the chancellor (spoiler alert) has a Saul-to-Paul conversion

The court drama continues to unfold amid a backdrop of sweltering heat, public riots and fake news. While many of the scenes are simplistic, and the dialogue often wooden, the film shines an uncomfortable light on Germany.

In particular it takes direct aim at a very German brand of sanctimony: a deep psychological need to be viewed as being not just law-abiding but of deep moral integrity, entitled to lecture others who fall short of its moral standards, while simultaneously pursuing contradictory policies in its own national interest.

This allowed the German leader, within a week in 2007, travel to Antarctica and pose with a melting iceberg as the “climate chancellor”, then travel on to Brussels where she blocked efforts to reduce car CO2 emission limits to protect the German auto industry.

By the end of the film, somewhat unrealistically, the chancellor (spoiler alert) has a Saul-to-Paul conversion. She realises the error of her ways and urges the court not to make the same mistake or, like her, end up before a tribunal 20 years hence.

“I studied physics in East Germany and the laws of nature were an objective truth for me but, as a politician... increasingly they became subordinate to political practice and the retention of power,” she said. “Politics that decreed people to make do with less found no majority... now I ask myself whether I should have taken the risk of losing the next election.”

In the end the court upholds the complaint of the 31 member states, Germany is fined and the court encourages other cases. In 2034, it’s open season on the world’s largest polluters.