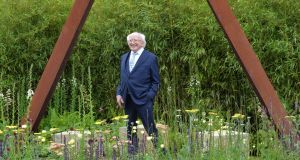 President of Ireland Michael D Higgins has applauded the people of Galway City for their campaign to be Ireland’s first urban park, adding that it is a “powerful and tangible exemplar” of what can be done by grass-roots campaigns.

Speaking at the launch of the campaign for the Galway National City Park status, the President, who is the sole patron of the initiative, said the scheme will be “so enriching”.

The aim of the campaign is for Galway to be viewed as a city which is dedicated to sustainability, where citizens benefit from, and are strongly connected to, nature.

“What you are doing here – planting trees and wildflowers, creating a series of linked woodlands, meadows, wetlands, parks, waterways and green spaces, providing ‘ecological corridors’ for wildlife to move into and out of the city – is such a magnificent example of active citizenship at its very best,” Mr Higgins said.

“This initiative will play a critical role in improving the biodiversity, air quality and ecological balance of the Galway metropolitan area, increasing awareness and education of the issues of climate change, biodiversity and ecology, while improving human health and wellbeing.”

The President said that “like many cities around Ireland”, Galway “would benefit” from improved pedestrian and cycling infrastructure. He believes this initiative “can significantly contribute to that objective” and raise awareness of Galway City’s “extensive network of natural and man-made waterways”.

He also said it was “heartening” to see an emphasis on locally grown food and responsible consumption, including the achievement of zero waste.

Mr Higgins said the threat posed by climate change and biodiversity is “such a momentous challenge of enormous scale that it can sometimes feel overwhelming”.

“However, projects such as this are a powerful and tangible exemplar of what can be done from the ‘bottom-up’, tackling the issue at grassroots level and fostering widespread awareness and buy-in, creating an environmental consciousness that can deliver powerful, far-reaching and lasting results,” he said.

The President also paid tribute to Brendan Smith, environmental activist, and convenor of the campaign, and other volunteers who are “playing their part for the betterment of society”.