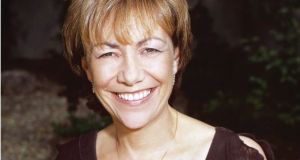 Author Sheila O’Flanagan said she would be subjected to a significant loss of privacy if the new school was built. File photograph: The Irish Times

One of the country’s best selling authors, Sheila O’Flanagan has failed in her bid to prevent Bono’s old school securing planning permission for a new school near her north Dublin home.

Ms O’Flanagan told An Bord Pleanála the new school would be “catastrophic” for her privacy at her home as the school will be too close to her home and neighbouring houses.

The appeals board decision gives the green light to Mount Temple School on Malahide Road, Clontarf to demolish the existing school and build a three-storey school accommodating 1,000 students.

Famously, all members of U2 attended Mount Temple School and the band formed after Larry Mullen put a notice on the school notice board in September 1976.

In her appeal, Ms O’Flanagan said she was a writer and worked from home.

“I need space and time for reflection as well as physically writing,” she said. “I do not want to be observed daily by students as I work. Nor do I want to observe them.”

Other local residents also objected to the plan. The development will be closer to homes than the current school building.

Ms O’Flanagan said she would be one of the most affected by the building “and subjected to a significant loss of privacy both to my home as a residential space and to my home office where I have worked for more than 20 years”.

She said she was “very concerned” about her ability to continue to work if she were to be “under constant observation by students at the school”.

“Pupils will be able to look directly into both my home office and living area from their classrooms as well as having an unimpeded view into my bedroom which I find totally unacceptable, “she said.

She said when permission was granted by Dublin City Council “the very valid concerns of the broader community” were not taken into account.

“It should not be the case that the very necessary development of the school should impact so catastrophically on the residents who have always supported it.”

Ms O’ Flanagan also criticised the Department of Education’s decision to move the school to within 100 metres of her home in spite of the school having an area of 9.5 hectares to build on.

The appeals board inspector in the case, Colm McLoughlin, recommended that planning permission be granted. He said he was satisfied that undue loss of privacy or overlooking impacts for residents of neighbouring properties would not arise. This was due to the positioning and orientation of upper-level windows, the distances between the proposed building and neighbouring properties and the screening that would be provided by existing boundaries, including mature trees, he said.

He also said the development “would not be likely to lead to a substantial increase in disturbance for neighbouring residents”.