The trouble with meat: Why climate scientists are targeting beef 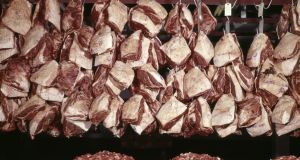 The average amount of meat consumed per person per year globally has nearly doubled in the past 50 years. File photograph: H Armstrong Roberts/ClassicStock/Getty

Taoiseach Leo Varadkar is not the first politician or international figure to commit to reducing their meat consumption in making a contribution to tackling climate change.

At Fine Gael’s think-in on Monday, in response to a question on what he was doing to reduce his carbon footprint, Mr Varadkar said he was “trying to eat less meat – both for health reasons and for reasons of climate change”.

He defended these remarks in the Dáil on Tuesday after angry criticism from a number of opposition TDs who said the farming sector is already under threat from Brexit.

Not all politicians have been so clear. In October, UK climate minister Claire Perry told BBC News it was not the government’s job to advise people on a climate-friendly diet. She would not say whether she herself would eat less meat. She was accused by Friends of the Earth of a dereliction of duty as they insisted ministers must show leadership on this difficult issue.

Already, Mr Varadkar has been accused of not acting in the national interest and of undermining a €12 billion agriculture industry notably by rural TDs such as Danny Healy-Rae and Michael Fitzmaurice. Irish Cattle & Sheep Farmers’ Association president Patrick Kent described his comments as “reckless in the extreme”.

The economic stakes are high. In 2018, meat and livestock exports amounted to €3.97 billion. The reality of climate change would suggest, however, the cost of consumption as usual will be many times more.

A definitive study by a team led by Dr Marco Springmann at the University of Oxford concluded huge reductions in meat-eating were essential to avoid dangerous climate change.

Analysing the food system’s impact on the environment, it said western countries needed to reduce beef consumption by 90 per cent – Ireland is among the top consumers of beef in Europe; estimated annual per-capita consumption is 19kg.

The research found enormous changes to farming were needed to avoid destroying the planet’s ability to feed the expected 10 billion population by 2050. In contrast, Ireland has been justifying rapid expansion of its beef and dairy sectors on the basis of global population growth, and insisting (correctly) it is among the most carbon-efficient countries in the world in doing so.

Food production already causes great damage to the environment, via greenhouse gases from livestock; deforestation and water shortages from farming, and vast ocean dead zones from agricultural pollution. But its impact will get far worse as the world population rises and global income triples, enabling more people to eat meat-rich western diets, the Oxford study concluded.

The animal agriculture industry is not only vulnerable to the observed and predicted effects of climate change (just look at how extreme weather triggered fodder crises of late); it is also a key contributor to the problem.

Farming of animals for meat and dairy products accounts for 16.5 per cent of global carbon emissions. The animal sector is responsible for a third of all anthropogenic methane and two-thirds of nitrous oxide emissions – potent greenhouse gases that trap more heat than carbon dioxide.

Ireland and New Zealand are unique in the world in having most carbon emissions coming from agriculture rather than heavy industry – while reducing emissions from the former is notoriously difficult. As meat consumption climbs steeply, it is likely to increase emissions and reduce biodiversity, other studies suggest.

High levels of meat consumption have been linked to increased risk of colorectal cancer and cardiovascular disease. The average amount of meat consumed per person per year globally has nearly doubled in the past 50 years.

There are indications some countries may have reached “peak meat”, with consumption rates falling slightly. However, middle-income countries, particularly China and others in east Asia, are still seeing a rise.

Moderates are not suggesting everyone should become vegetarian or vegan (though it is indisputable these diets are better for the environment, contribute less to climate change, and are healthier) or that governments should mandate limits on meat consumption.

They contend, however, the climate impact of what you eat and drink must be taken into account – and there is an ethical requirement on most global citizens to shift the balance away from meat.