Concern that ban could lead to more incineration and dumping 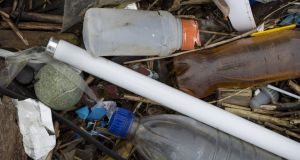 China has banned the importation of recyclable material including most categories of plastic from January 1st. Photograph: Dan Kitwood/Getty Images

The Government should move decisively to see off a likely recycling waste crisis brought on by China banning importation of recyclable material including most categories of plastic from January 1st, according to the Green Party.

Already recyclable material, which was due to be exported to China, is building up in the UK, said Cllr Ciarán Cuffe, Green Party group leader on Dublin City Council.

“Now is the time for action, instead of waiting for the crisis to unfold. These changes were flagged by China six months ago and yet we are still waiting for Minister for Climate Action and Environment Denis Naughten to respond,” he said.

“The same will happen here unless Mr Naughten takes decisive steps. If he fails to act, the consumer will have to pick up the tab and pay more for burning and sorting through our rubbish.”

The scale of the problem, he said, required a series of actions including:

– Introducing an incineration levy similar to the landfill levy so valuable recyclables are not sent to incinerators in Ringsend, Dublin, and Duleek, Co Meath;

– Introducing reverse vending machines in supermarkets with a deposit on beverage containers, as is the case in Germany;

– Rewriting regulatory approval under which Repak operates to ensure Ireland reaches the proposed EU target to recycle 75 per cent of waste packaging by 2030.

The EPA had highlighted that a significant amount of valuable material that could be reused was being wasted, Cllr Cuffe added.

In contrast, promotion of a circular economy saved money, reduced pressure on the environment and boosted job creation. Currently, far too much Irish waste was being burned, dumped or exported, and “there is a real danger the China ban would lead to more incineration and dumping”, he said.