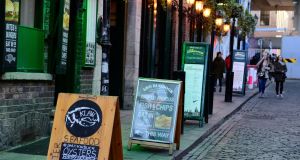 Street advertising in Temple Bar, Dublin. Restaurants, cafes and bars must have a licence from the city council to put tables and chairs on the footpath outside their premises Photograph: Cyril Byrne

The public realm in the city centre had become increasingly “littered” with a proliferation of “sandwich boards” which had no permission to be on the street, as well as large numbers of tables and chairs, many of which were unlicensed, Mr Keegan said.

The chief executive of the Restaurants Association of Ireland, Adrian Cummins, accused Mr Keegan of being on an “anti-tourism rampage” when he should be supporting the city’s “cafe culture”.

Restaurants, cafes and bars must have a licence from the city council to put tables and chairs on the footpath outside their premises. The annual licence fee costs €100, in addition to €125 per table and an annual “space rental charge” ranging from €200 to €500.

However, Mr Keegan said there has been a “creep” of additional unlicensed tables and other structures, as well as the use of unauthorised advertising boards outside premises.

“We have had a fairly lax attitude to advertising boards, and tables and chairs, and all kinds of obstructions partly because we felt businesses were under pressure during the construction phase of the Luas Cross City.”

He said all sandwich boards and other advertising structures placed on the footpath outside shops and cafes, often advertising city tours, were unlicensed.

“There are no licensed sandwich boards, they are all illegal, and we’ve turned a blind eye. A whole lot of unauthorised furniture has appeared – barrels outside pubs, for instance, and in the new year we intend to address that.”

He said some restaurants have erected barriers around their outdoor seating which do not comply with their licences, and have also added tables without extra payment

“A lot of tables and chairs are licensed, but there has been creep of tables and permanent structures are appearing that don’t comply with our standards in terms of the height, And some of these barriers aren’t removed at night.”

He said this encroachment on to footpaths, as well as being unauthorised, posed difficulties for people with visual and mobility impairments, and would be dealt with by a new band of council enforcement officers.

“We have a new inspectorate dealing with on-street issues such as casual trading and street performances, and now they will be moving on to deal with unlicensed street furniture. There are people carpeting the public domain, and that can’t continue.”

He said penalties were being considered, and could include confiscation and fines.

Mr Cummins said the council earned a considerable income from charging restaurants for outdoor seating. “The council is making a lot of money on the backs of restaurants. This charge generates around €500,000 a year but costs them only €100,000 to administer.”

He said a council-commissioned report in late 2016 recommended that the charges for outdoor seating be reduced. “The council is supposed to be encouraging a cafe-style culture in the city. Instead Mr Keegan seems to have a vendetta against tourism. Many businesses went to the wall during the Luas construction, or saw a serious fall in their income.”

He said he would be in favour of measures to control barrels and advertising structures for which no fee were being paid. “But I think it would be more in order for Mr Keegan to sit down man to man to discuss these things, rather than engaging in an anti-tourism rampage.”