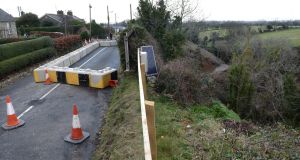 The scene of the subsidence on Edmondstown Road, Rathfarnham, Dublin, due to digging underneath. Dublin City Council has closed the road between the Merry Ploughboy pub and Tibradden Road to carry out “emergency” stabilisation work. Photographs: Dara Mac Dónaill

Part of a scenic road leading to the Dublin mountains in Rathfarnham could be closed for up to a year, after alleged illegal excavation work caused its subsidence.

South Dublin County Council is taking enforcement action against Ghandi Mallak, who it said was responsible for undertaking unauthorised work that destabilised the road.

The council has closed the road between the Merry Ploughboy pub and Tibradden Road – a distance of about 300m – to carry out “emergency” stabilisation work. However it said the road could be closed for up to one year to facilitate full remedial work, forcing motorists to take a detour of more than 5km.

The council said late last year that Mr Mallak undertook a number of developments including the alteration and excavation of rural lands immediately to the west of the road, and of the western bank of the Owendoher river. He was also responsible for the construction of internal roadways and paths on the lands, and the installation of a 17sq m metal container, including a septic tank, on the lands.

The lands are zoned for rural amenity and agricultural use, and the work was undertaken without planning permission, the council said.

The council last November instructed Mr Mallak to immediately stop development of the land and “any further works that will destabilise the public road the western riverbank of the Owendoher river”.

However, while it has undertaken emergency work to stop the collapse of the road, it expects Mr Mallak to reinstate the land using competent professionals. Failure to comply with the council’s enforcement order can result in a fine of up to €12.7 million or imprisonment.

A spokeswoman for the council said Mr Mallak was co-operating with the council.

“The council have been in contact with the landowner in question who has engaged with the enforcement process.” It said responsibility for remediation “rests with him”.

The road has been subject to tests, which will determine the design solution for its remediation, she said. However the road could be closed for up to a year, and it was not yet known how much the work would cost, she said.

Mr Mallak, originally from Syria, came to Ireland in 2001. In 2012, he won a landmark case against the State when the Supreme Court overturned the minister for justice’s refusal to grant a Syrian lawyer a certificate of naturalisation for Irish citizenship after finding the minister was obliged to give reasons for his refusal but failed to do so.

Mr Mallak, a Dublin-based businessman, would not respond to queries from The Irish Times in relation to the Edmondstown Road lands.

Local independent councillor Deirdre O’Donovan said the closure of the road had had a devastating effect on local businesses and residents.

“There is a huge amount of anger and frustration locally over this. It has had a catastrophic effect on two local pubs in the run-up to Christmas. The number 16 bus has had to stop coming up the road. It couldn’t have come at a worse time.”