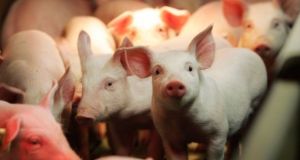 Ireland must ramp up security measures against the spread of a deadly disease threatening pig farmers across Europe, Minister for Agriculture Michael Creed has warned.

Ireland must ramp up security measures against the spread of a deadly disease threatening pig farmers across Europe, Minister for Agriculture Michael Creed has warned.

Despite efforts to prevent African swine fever (ASF) reaching western Europe, the highly contagious virus has been detected in two wild boars found dead near the municipality of Étalle, in Belgium, close to the French border.

It was previously confined to a number of herds in Lithuania, Latvia, Estonia, Poland, Czech Republic, Hungary, Romania and, more recently, Bulgaria, but has been spreading within the EU since 2014.

Although usually fatal for pigs, the virus is not dangerous for humans and meat from affected pigs does not pose any food safety risk.

The escalation of the outbreak across Europe has sparked calls for a mass cull of pigs to protect the pork industry.

Mr Creed said the latest development “is an increasing cause of concern” and urged pig farmers and people travelling to Ireland from affected countries to step up precautions.

Mr Creed cautioned people not to bring meat from already affected countries into Ireland, and for anyone visiting a farm in those countries to take “particular biosecurity measures before entering onto Irish farms.”

The illegal importation of meat infected with the ASF virus for feeding pigs is believed to the main risk.

There are an estimated at 1.6 million pigs in Ireland. Almost half of them are held in just 47 farms countrywide.

There has never been any confirmed cases of ASF in Ireland.

When last detected in Belgium in 1985, some 30,000 pigs were culled, while 140,000 animals were culled after the latest outbreak was discovered in Europe’s second-largest farm in Romania last month.