Pike no longer deemed to be the unacceptable foe 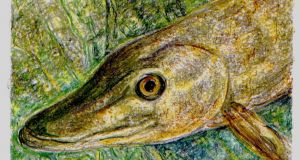 It’s 120 years since a few little silverfish from England were tipped into the Munster Blackwater river.

Discarded from a tin of live bait, Rutilus rutilus, the alien, red-eyed roach, would change fish life in Ireland’s lakes and rivers. As the now chief prey of the predatory pike, it could resolve at least some of a long dispute over its national management.

As the late Dick Warner, conservationist and angler, put it together, the tin of live fish was carried from England by a party of pike anglers in 1899. They used the mail boat and the new steam railway to reach Cappoquin in time to keep a wriggle in the roach impaled on their hooks. Fishing over, they tipped out the tin.

This live-bait technique has been slow to change and is still widely used in the UK. An Irish freshwater byelaw of 1977 made it illegal to use live fish as bait, well ahead of a similar regulation passed in Scotland in 2007.

The Scottish move arose largely from new concern with fish pain, but the Irish aim was to keep roach from invading even more lakes and rivers. Today, the roach that Irish anglers cast for pike are non-wriggling, blast-frozen and sold online in plastic packs.

Deliberate, illegal transfers of live Blackwater roach began half a century ago, often by coarse anglers wanting a broader choice of catch. The fish spread to three-quarters of the island’s waterways over the later 1900s, breeding prolifically and seriously competing with brown trout for food.

In the 1950s, however, the first concern of national fishery authorities was the pike’s appetite for trout in the west’s prime angling lakes. Some 36,000 pike a year were culled or relocated from lakes such Mask, Conn and Corrib. A greatly reduced operation has been continued since then by Inland Fisheries Ireland (IFI).

“With a sag belly and the grin it was born with,” wrote Ted Hughes (who once fished for pike), the fish could inspire great animosity and, according to the Irish Pike Society, “blind hatred, prejudice and discrimination” from the IFI.

The ill-feeling was not helped by official listing of the pike, Esox lucius, as an alien fish imported in the 16th century.

This was stoutly resisted by pike angling clubs and the Irish Pike Society, pointing to the occurrence of the much earlier Irish name of “liús”. Any trout declines, they suggested, would be more properly blamed on pollution and arterial drainage, or competition from roach.

Their case gained in persuasion as tourism earnings from pike angling rose towards a current estimate of €750 million a year. New research, funded chiefly by the IFI, has greatly changed the official profile of the fish and the probable future of its management.

First, a genetic study from UCD proposed that the first wave of pike reached Ireland from Europe about 8,000 years ago on freshwater flows from melting ice, making it a native of post-glacial colonisation. In the Middle Ages, more were brought from Britain by people, mainly to our southern rivers.

Then, a “choice experiment survey” by the Economic and Social Research Institute, published last year, found that most (61 per cent) trout anglers “are negatively disposed towards pike stock control”. Their effective sample numbered a modest 197.

Finally, the IFI’s own research, published last month, analysed stomach contents sluiced humanely from almost 1,500 pike electrofished during 2016 from the large trout lakes of Conn and Derravaragh. These had been invaded by roach in the 1970s.

Comparison with earlier data found “a profound shift in the diet of pike in Irish lakes”, with roach the single most important prey.

The research developed statistical models “to predict the probability of co-existence between pike and trout” in a variety of lakes and conditions. These suggest that this can happen in relatively big lakes with many strong streams and plenty of alternative prey, but not in less complex waterways.

Separate research on Connemara’s Owenriff system, for example, where pike were introduced by anglers above a natural waterfall barrier, brought disastrous decline in both trout and salmon.

New fishery management by the IFI will, it seems, be more finely tailored to individual species and ecosystems. Pike are no longer the unacceptable foe, even if it took an invasive alien species to let them off the hook (so to speak).

This will delight pike anglers, only one per cent of whom actually keep their catch to eat – the pike’s many Y-shaped bones are fiddly, to say the least. It is less likely to persuade the 39 per cent of trout anglers in the ESRI survey who advocate pike control (of whom one-third were “more extreme in their preferences”).

Of them all, 12 per cent keep their trout to eat. I have found no joy in fishing, in lake or sea, for any other purpose.