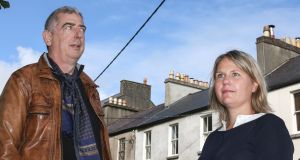 The increasing use of solid fuels such as wood chippings and peat products to heat homes is causing “extreme air pollution” in Dublin, scientists at NUI Galway have found.

The fuels, which are marketed as being “green” and “climate-friendly”, are causing “extraordinarily high levels of pollution” threatening human health, according NUIG’s centre for climate and air pollution studies (CCAPS).

It predicts smoke caused by the fuels is set to lead to a return of smog despite the early 1990s smokey-coal ban that was put in place by Mary Harney in towns and cities.

Between November 2016 and January 2017, the daily AQG was breached on one in five days, usually in the late evening, while hourly levels were frequently 10 times higher than the 24-hour AQG threshold (25 micrograms).

This limit is stricter than current regulatory levels but “is not to be regarded as safe since health problems can still occur below such thresholds”, the researchers warn in their study in the journal Nature Sustainability.

Using technology that can track the tiniest particulates, the team led by Dr Jurgita Ovadnevaite found that 70 per cent of the pollution found during these periods is linked to peat and wood-burning.

The dramatic rise comes despite the fact that only a small percentage of homes use peat or wood as a primary fuel – just 13 per cent of households, based on the closest census data.

“All exceedances were driven by peat and wood rather than coal or oil, or even non-residential sources such as traffic,” the researchers note.

The contribution made by coal is “strikingly low”, highlighting the continuing success of the ban in the 1990s.

Most “bad air” days occur during cold and stagnant weather when fuel consumption is high and air dispersion is low, said the Galway-based research team.

Homeowners have been encouraged to move away from fossil fuels to “low-carbon” or “carbon-neutral” ones to curb greenhouse gases responsible for global warming. “[However] this shift is often towards wood [including pellets] considered as ‘low-carbon’ or ‘carbon-neutral’ biomass fuels and other solid fuels which can lead to disproportionately poor air quality,” said Dr Ovadnevaite.

CCAPS director Prof Colin O’Dowd said: “The disproportionate sensitivity of air pollution levels to solid fuel is quite concerning...since fuels like wood are one of the most popular choices of ‘low carbon’ biomass fuel.”

The findings have major implications for climate change policy which favours biomass to reduce carbon emissions. “We have to avoid ‘the diesel mistake’,” said Prof O’Dowd.

Climate policy must be developed in a way that does not replace one problem with another, and instead offers “win-win outcomes so that actions to mitigate against climate change benefit air quality and vice versa”.

Prof O’Dowd, a global authority on aerosol pollution, said the threat posed by solid fuels could be far greater in cities than that from diesel, although more studies were needed.

The EU is reviewing its standards before adopting tougher World Health Organisation rules by 2020, while Minister for Climate Action Denis Naughten is due to publish new national air policies soon.

“It is important that this innovative research, which highlights the disproportionate impact of solid fuels on air quality, is fully considered in developing future EU legislative and regulatory frameworks to protect public health and the environment,” said Prof O’Dowd.

He said the smokey-coal ban did its job where it was applied, and the nationwide extension in 2019 would bring further benefit. “But we need to remain vigilant and consolidate those victories by developing policies that continue to reduce air pollution and improve public health.”

Scientists at UCC, the Chinese Academy of Science (CAS) and the Italian CNR-ISAC facility in Bologna contributed to the research. It was funded by the EPA, the Science Foundation Ireland-MaREI Centre in UCC and CAS.