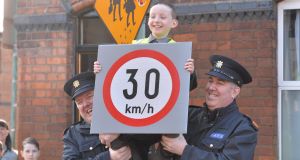 In March last year the 30km/h speed limit zone was expanded to certain residential areas and in the vicinity of schools in Dublin city centre. Photograph: Alan Betson / The Irish Times

New bylaws to allow the introduction of 30km/h speed limits across all residential streets in the capital have been accepted by Dublin City Council’s transport committee.

The move to slow traffic around Dublin was formally voted in on Wednesday by the council’s Transportation Strategic Policy Committee (SPC).

The bylaws extend to the boundaries of Dublin city, although several main arteries will retain higher speed limits.

Having passed committee stage, the proposed bylaws must now progress to a full vote of the council next month. If approved there, a phased rollout will commence across at least 12 southside and 19 northside suburbs.

A public consultation carried out on the issue in June found a majority of people in favour of the new by-laws.

“Looking at the responses submitted, it is clear there is very strong support for the expansion of the zones and the pilot scheme outside the schools,” a report circulated to the committee said. “There is also a strong demand from residents in other areas not included in this phase to have their area included in future phases.”

Of 63 responses to an online survey carried out as part of the public consultation in June, about 95 per cent supported the 30km/h limits in residential areas. However, a bout two thirds of respondents believed people would ignore the speed limits with little fear of being caught by gardaí.

The recent public consultation covered 31 new zones which take in Harold’s Cross, Rathmines, Portobello, Ranelagh and east Inchicore on the southside. On the northside suburbs affected will include Coolock, Artane, Killester, Clontarf, west Cabra, North Wall and parts of Glasnevin, Finglas and Ballymun.

Schools located on eight major arterial roads would have periodic reductions to 30km/h outside their premises at their start and finish times. This would affect parts of Long Mile Road, Slievebloom Park, Chapelizod Road, Howth Road, Griffith Avenue, Seamus Ennis Road, Terenure Road East and Clareville Road East. Outside the specified times the limit in those areas would revert to 50km/h.

A final phase, expected next year, would extend to Terenure, Rathgar, Clonskeagh and Donnybrook on the southside; Ballyfermot, Bluebell, and Ashtown to the west of the city; and Drumcondra, Whitehall, Donnycarney, Beaumont, Darndale, Northwood and the remainder of Glasnevin, Ballymun and Finglas on the northside.