Large, valuable, private properties will ‘fall into the sea’ because of climate change

Ireland may have to endure temperature rise of over four degrees, conference told 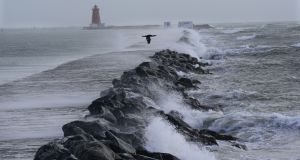 The conference heard that the lessons of Storm Ophelia needed to be absorbed in order to ensure vital infrastructure is more resilient. Photograph: Cyril Byrne

Houses, including some large valuable private properties, will fall into the sea and it is not in the public interest to save them, a climate change conference has heard.

Prof John Fitzgerald told the Met Éireann conference, entitled Making Ireland Weather and Climate Prepared, that State investment would have to be prioritised to adapt to the inevitable consequences of climate change.

Prof FitzGerald, who is chairman of the Government’s Climate Change Advisory Council, said difficult decisions would have to be taken beyond “do not build in areas likely to flood” and that protecting some areas would not be possible.

Houses, including some large valuable private properties, were going to fall into the sea and it was not in the public interest to provide protection for them, Prof Fitzgerald added.

“But if Cork is going to be flooded, that has different implications,” he said.

The lessons of the recent Storm Ophelia needed to be learned in making vital infrastructure more resilient with all relevant agencies working closer together, especially those providing electricity, water and sewerage.

Having experienced three instances where the Dodder river in Dublin burst its banks, it should now be technically possible to give a one- to two-hour warning of such events, he said. “They have done it in Vietnam. They have done it in Minneapolis. Why not Ireland?” he asked.

A Met Éireann official told the conference on Tuesday that temperatures in Ireland could rise by up to 4.5 degrees by the end of the century as a result of climate change and sea levels could go up by as much as a metre.

Séamus Walsh, head of climatology and observations with the forecaster, said there was a case for more strongly acknowledging climate change effects in day-to-day weather forecasting.

He said more detail on climate change impacts and the science behind it could potentially be provided.

In addition to better forecasting now being available, the science around likely climate scenarios was becoming clearer, he told the conference.

Mr Walsh said the most likely climate change scenario for Ireland would mean the island experience a temperature rise this century of between 1.5 and 4.5 degrees. He said sea level rises would be between 0.5m and 1m but that the final outcome depended on the success of global actions to reduce carbon emissions.

Rising sea levels and warmer seas would result in more severe but less frequent storms, he added, but there would be more winter days when rainfall exceeded 30mm.

Mr Walsh said the new colour coding system for weather warnings had increased understanding among the public of the likely impact of such events.

He said Met Éireann planned to make a smartphone app available “to get warnings out there in a more timely manner” and to use social media more.

Former president and climate justice campaigner Mary Robinson said Met Éireann should utilise its expertise to help those living on the front lines of climate change.

“In some of the poorest and most climate vulnerable countries, weather data is often unreliable or completely lacking,” she said. “Many do not have the capacity to provide risk information to their own citizens and are unable to manage disaster risk effectively.

“ Your expertise in understanding, not just how our climate system is evolving, but also in assisting with developing community resilience in the face of climate impacts, will help to save the lives and livelihoods of those worst affected.”

Ms Robinson said weather forecasting and climate change analysis were complex and there was a need for better communicating the realities to the public.

“The technical jargon of the climate-change community – a world of mitigation, adaptation, market mechanisms and nationally determined contributions – is meaningless to most people and only serves to further alienate.”

Met Éireann’s head of forecasting, Gerald Fleming, outlined how weather and emergency management has improved when dealing with events like Storm Ophelia.

Forecasting was now possible within the 10-day period in advance of extreme weather and this allowed agencies to anticipate impacts and plan the actions they might take, he said.