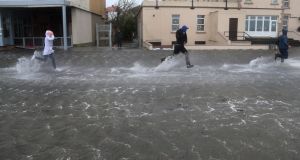 There has been a large rise in sea levels around Ireland in recent decades, and the trend is going to accelerate over the next century. This will test the State’s ability to withstand “almost perfect storms”, according to climate change expert Dr Margaret Desmond.

Since the early 1990s, sea level rises of about 3.5cm per decade have been observed around the Irish coast which is attributable to climate change, concludes an EPA report co-ordinated by Dr Desmond, who is based at UCC environmental research institute.

This trend is likely to accelerate with an additional increase of 55cm to 60cm by the end of the century. This “will amplify the impacts of storm surges and wave erosion in coastal areas”.

The study, which evaluates “the state of knowledge on climate change impacts for Ireland”, confirms Irish weather has seen dramatic changes in a relatively short period since the 1960s.

All seasons are warmer; average annual rainfall has increased (especially in the western half of Ireland) and flash flood patterns have changed; all attributable to global warming.

Dr Desmond said as an island nation with 40 per cent of the population living within 5km of the coast, we are vulnerable given the extent of predicted sea level rise.

In addition, critical infrastructure, notably transport, communications and energy systems, were located within such areas and at risk in such circumstances. They were inevitably interconnected “as indicated by Storm Ophelia; when one goes down, the other follows”, said Dr Desmond. In such circumstances there was heightened risk of systems collapse in the face of “almost perfect storms”.

“Ireland is facing accelerating sea rise up to 2100 and beyond. That is the key message we want to get out,” said Dr Desmond.

The inevitable consequence of this would be loss of land and amenities in physical terms – and loss of employment in local economies.

The report updates the previous “state of knowledge report” published in 2009. It combines information from a range of studies undertaken by Met Éireann; third- level institutions and other government agencies, as well as evaluations by the Intergovernmental Panel on Climate Change – the UN’s expert group on global warming.

“Observations of the atmosphere, oceans and land show that Ireland’s climate is changing. The observed scale and rate of change is similar to global trends. These are projected to continue and increase over the coming decades,” Dr Desmond said.

The report highlights a range of adaptation options across all sections of the Irish economy which can be used “to address vulnerability and build resilience to a changing climate”.

Planned management of associated impacts is necessary to reduce their adverse impacts, according to the authors, which include Dr Frank McGovern, the EPA’s chief climate scientist, and Philip O’Brien, an EPA expert on adaptation. Key socio economic sectors to be most affected include infrastructure; the built environment, agriculture, coastal areas, forestry and biodiversity.

“The evidence that Ireland is being impacted by global climate change is now clearer and more compelling,” Dr Desmond said. “Trends are apparent across key climate variables such as temperature, precipitation, sea level rise and in ecosystems.”

The study says climate change will continue but there are uncertainties on details as “the chaotic nature of the weather/climate system is a fundamental source of uncertainty, which is amplified by climate change”.

Minister for Climate Action Denis Naughten said he was aware of the need for adaptation measures due to climate effects, including rising sea levels. He confirmed a national adaptation plan was about to be submitted to the Government.

Climate change: What it will mean

– Sea levels: Since early 1990s Irish sea levels have risen by 3.5cm per decade – this trend will accelerate. Additional increases of 55cm-60cm this century will amplify impacts of storm surges and wave erosion in coastal areas.

– All seasons will be warmer: Average annual temperature rise is likely to be 1 to 1.6 degrees in Ireland by mid-century; largest increases to occur in eastern areas.

– Annual rainfall to increase: An increase of 5 per cent (60mm) in the 1981-2010 period has occurred (compared with 1961-1990). Larger increases were recorded in the western half of the country; this trend is likely to continue.

– Flooding patterns to change: Increasing seasonality in flooding is predicted with increased floods in winter and spring and less in summer.