Glackmore Mountain in Donegal was covered in a blanket of snow as temperatures plunged to minus four degrees Celsius. Video: Bren Whelan / Donegal Climbing (www.donegalclimbing.ie) 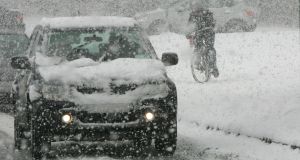 Snow in the Blanchardstown area of Dublin in 2010. File photograph: Alan Betson

Snow is expected to fall in many parts of Ireland this weekend as temperatures plunge to minus four degrees Celsius.

A status yellow weather warning has been issued for the 26 counties for between 6pm on Saturday and midday on Sunday. Another such warning for the six counties was issued yesterday.

Temperatures will stay around freezing for the weekend and a low pressure area will cross the country on Saturday night bringing with it possible accumulations of snow everywhere.

Saturday will stay extremely cold day with frost lingering for much of the morning and day time temperatures rising no higher than 5 degrees nationwide.

Met Éireann forecaster Paul Downes said on Friday there was a “growing possibility” of snow both on Saturday night and Sunday morning.

He said most of the country will see snow on Saturday night and there is possibility of more snow on Sunday morning. Sunday will be another cold day with frost forming on Sunday night. All indications suggest a return to milder weather next week.

“Overnight, a band of wintry showers will extend northeastwards across the country giving falls of sleet and snow in many areas with some accumulations. Cold and icy with a widespread sharp frost with minimum temperatures of -4 to zero degrees with light breezes freshening in some areas by morning,” according to the latest forecast on Met.ie .

Sunday will start very cold with snow lying in many areas leading to hazardous conditions on roads and pathways. “There’ll be further hail and snow showers (possibly falling as rain or sleet on windward coasts), especially across eastern counties with further accumulations expected.”

It is expected to turn much milder and wetter on Tuesday.

Payroll audit finds some gardaí paid for being in two places at once 13:42
Covid-19 Vaccine Tracker: What's available in the Republic of Ireland and what else is coming? 13:42
Tánaiste appeals for ‘patience with HSE’ in ‘long road ahead’ for vaccination 13:25
Meat processing model was becoming less viable, even before Covid – Ictu report 13:17
New ‘cohesive approach’ to tackling obesity is a milestone, Donnelly claims 12:35