Covid-19 has changed our world. It could also change the places where we live 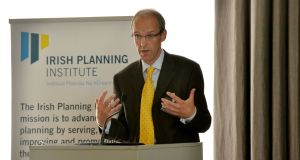 Planning regulator Niall Cussen: “For people who have toiled with the commute, the lure of remote working or blended working options will be very strong.” File photograph: Alan Betson

Pandemic positives are a bit thin on the ground but its timing, in one particular way at least, has been auspicious given the attention it has brought on how people live and work.

The focus has come at a time where almost all local authorities are reviewing development plans that will guide the shape of cities, towns, suburbs and villages across the State for decades ahead.

Calls to cut down on long commutes and urban sprawl are not new, but they have become all the more pressing with the threat of climate change. However, Covid-19 has concentrated minds in a way that climate change has not.

The danger that could lurk in the return to a cosy 'village' existence, be it rural or suburban, is that it could suck the life out of cities

“People are seeing it for themselves now in how they have had to adapt the way they live and work around Covid,” planning regulator Niall Cussen tells The Irish Times.

The quality of the few kilometres around the place in which one lives, the condition of footpaths, cycleways, the distances to local shops, parks and other amenities all matter now deeply.

“These issues have become very real to people and where there are deficiencies, these are now more apparent to people,” says Cussen. The local trumps everything.

The danger that could lurk in the return to a cosy “village” existence, be it rural or suburban, is that it could suck the life out of cities but, says Cussen, living locally is just as important an aspiration for the city centre.

“If the demand for commercial office space has softened, will that improve the case for the development sector to use a site for a residential scheme? It might well be a more attractive prospect now.”

The possibilities opened up by remote working will, he believes, have a lasting effect too: “The technological and operational barriers have been broken. For people who have toiled with the commute, the lure of remote working or blended working options will be very strong.”

However, the rush away from long city commutes and a belief that a house on a half-acre is the best way to avoid Covid cannot mean an explosion in the number of unsustainable one-off rural housing, he says.

“We will be dealing with an existential climate crisis into the future which can’t be tackled with living in dispersed rural locations,” says Cussen, though there has already been a push for exactly such houses.

This raises the thorny issue of density. More homes are needed in existing towns, villages and suburbs – but those already living there often fear being overwhelmed. For many, high density means high-rise.

“The point needs to be made again and again that the highest density parts of Dublin are Drumcondra, Rathmines, Portobello and the Liberties. But there have to be trade-offs, such as not having a front and back garden, or scope to park a car outside the door ,” he goes on.

A mix of properties and uses will be all-important, if the '15-minute city' is to be created – a model already used successfully in Paris, Melbourne and Portland, Oregon

However, there is also a misconception around what low-rise means. In Dublin it is defined as any residential building up to 24m – eight storeys tall – and not just the two-storey three-bed semi.

“Context is everything,” Cussen says. “If you are living in an estate of two-storey semi-detached houses, eight storeys beside you might manifest as high rise, as might four storeys.”

The new Dublin City Development Plan will plot out new high-density neighbourhoods and, Dublin city planner John O’Hara says, these neighbourhoods are likely to have some tall buildings, but only where appropriate.

“It’s not about having a tall building for the sake of it,” he says. “The spatial aspects of where height is appropriate will be considered, looking at criteria such as overshadowing or wind and importantly the quality of taller buildings.”

A mix of properties and uses will be all-important, if the “15-minute city” is to be created – a model already used successfully in Paris, Melbourne and Portland, Oregon.

Essentially, everything needed for a good life – work, study, culture, exercise – should be available within 15 minutes by walking, cycling, bus, or tram, thus reducing the need for cars and urban sprawl.

The idea of having a 15-minute city might sound like a possibility for the likes of Dublin, but for regional towns the idea seems at best aspirational, if not fanciful.

Undaunted, however, the Southern Regional Assembly, which guides development in Munster, as well as parts of south Leinster and Connacht, is being even more ambitious.

Everything needed for daily life should be reachable within a 10-minute walk or cycle,” says Rose Power from the assembly’s EU projects office , adding that its plan offers a guide to local authorities on how to bring it about.

Three key towns in the southern region – Carlow, Ennis and Tralee – were used as pilots: “We discovered, as you would expect, a very high usage of private cars for transport in rural towns.

Government and European Union policy requires a shift towards more walking and cycling, but the public increasingly is demanding the same

“In a lot of cases that’s because we don’t make it easy for people to make other choices, but we can retrofit towns to make it easier to walk or cycle,” she told The Irish Times.

In some cases, gains were made simply by putting a gap in a wall of a housing estate to give walkers and cyclists quicker access. In other cases, minor changes to bus routes brought public transport closer to extra people.

The three towns have reacted positively, she says, while other local authorities across the southern region are beginning to incorporate the ideas: “We’re not suggesting it will fix every problem, but it gives them the toolkit to identify where their problems are and what they could do to fix them.”

Government and European Union policy requires a shift towards more walking and cycling, but the public increasingly, says Power, is demanding the same: “You only have to look at what’s happening on the ground.

“[People are] wanting to access services locally. Covid has identified the need for more sustainable travel, we really are on the cusp of change here,” she said.

Prof Geraint Ellis, chairman of environmental planning at Queen’s University Belfast, agrees that the pandemic offers opportunities: “A lot of eyes now are on how we make urban planning healthier.

“Issues such as overcrowded housing, a lack of access to walking infrastructure, a lack of good open spaces. If these were things we had dealt with before the pandemic we might have weathered it a lot better.”

Improving health through good planning not only helps to counter viruses but improves general health too, since it reduces the need for cars and tackles obesity.

For all the changes Covid has prompted, Ellis sees it more as an agent of evolution than revolution: “I don’t think I see it as a major turning point, but perhaps a point of reflection on the way we have been doing things.

“The 10-minute town or 15-minute city concepts are really good planning principles. If we could implement them and cut the reliance on car usage through good quality urban design, the health benefits will emerge.”

For Cussen, the current cycle of development plan reviews offers an unprecedented opportunity to make changes: “It is the season for thinking about the future,” he says.