The rat that chewed in from the cold, right through the wall

We live in a maze for rodent adventurers, lured in by food aromas and warmth 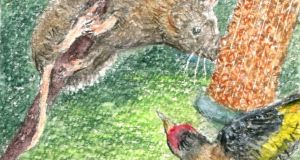 In a shadowy corner of our kitchen, a patch of freshly cemented wall gives me, if not pleasure, then some greater peace of mind.

Behind the cement are shards of broken glass and behind those the metal pot scrubber I had pushed deep into a hole between rocks of the old house gable. Such are the desperate mechanics of defence when a brown rat decides to burrow in from the cold, through plaster walling and all.

Autumn is, indeed, the peak season for reminders that rats exist. Peanut feeders hung up for for the birds can invite some surprising – and alarming – rodent acrobatics.

The first country rat I ever saw was sitting on our bird-table in the middle of a sunny day, the very picture of health and wellbeing. Comfortably poised upon its haunches, it held an oat flake daintily between its paws, like a child making a biscuit last. Its eyes sparkled and its whiskers trembled in the breeze.

It’s the tail that seems to bother me most, so brazenly naked and hairless. As well as for balance, it’s the animal’s heat-loss organ, controlling body temperature by dilating or constricting its blood vessels. Learning this does nothing to quench my distaste.

In last week’s column, discussing the economic costs of Ireland’s non-native species, I quoted the €2 million lost annually in the cereals eaten or spoiled by rats. Even this autumn, with yields well down, the passage of grain lorries will have set the roadside verges quivering with furry life.

In earlier years I grew a rood of barley to harvest for the hens. Once, lifting sheaves to build a rick, I was helped by a neighbour and his watchful dog. The dog had killed 13 rats on such an occasion, but now there was only one, which beat the dog to the ditch.

Farmers talk of “water rats” as different from the everyday kind, but swimming rats are the ordinary brown (or grey or black) ones, Rattus norvegicus. The name is misleading, persisting oddly when so many names in science have changed.

The animal may, indeed, have disembarked in these islands from Norwegian timber ships, but Rattus norvegicus was part of the earlier spread of the species from the steppes of central Asia. The earliest arrival in western Europe was from a Russian ship reaching Denmark in 1716 and it reputedly reached Ireland in 1722. (Norway didn’t get them for another 40 years.)

The black rat, Rattus rattus, already in Ireland, was native to India and first brought to Britain with the Romans. If the wayward chronicler Giraldus Cambrensis can be trusted, it had reached this island by 1187, seeking out the warmth of human habitation.

The black rat is smaller than the brown rat that displaced it, with larger ears and a tail even longer than its body. As a ship rat, its fleas brought Black Death to Ireland in 1348, initially to Howth or Dalkey. The warehouse lofts of the ports housed a long, if tenuous, population.

Its only confirmed colony today is on Lambay Island off Co Dublin, where it winters in farm buildings and can be seen scampering on the cliff-tops in spring and summer.

The black rat’s vegetarian tastes (in India it climbs trees for fruit and berries) may have handicapped its chances when the brown rat swept in, digesting almost anything chewable. But the overwhelming advantage of Rattus norvegicus lies in its prolific breeding.

Sexually mature at eight to 12 weeks of age, females can have litters as often as once a month, with about seven or eight babies in each. Exponential mathematics project potential annual offspring near to 100 and some 400,000 descendants per year.

Along with the material costs of damage and control come threats to human health. Rats can excrete leptospirosis (Weil’s disease) in their urine, a bacterial infection still rare in Ireland. Finding tunnels in my compost heaps has sometimes made it prudent to wear gloves.

The tunnelling in our gable was not the first. The old house was built of field stones a century ago and the new bit sits on a platform of rocks. We live in a maze for rodent adventurers, lured in by food aromas and the promise of warmth as winter closes in.

So yes, we set careful and covered caches of poison – if not, it seems, quite often enough. Once or twice over the years, a casualty has expired indoors, in some obscure and inaccessible cavity. But that may be more than you wish to think about, at breakfast or any other time.