Tax-free coal from North a burning issue for smokeless fuel

Up to 100,000 tonnes come across the Border every year, and much of it is not low smoke 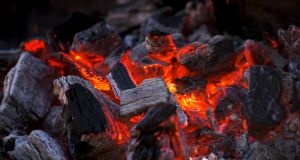 To the naked eye, the two lumps of coal are indistinguishable. However, when subjected to laboratory analysis, significant differences emerge, despite both being labelled as smokeless.

CPL Industries, one of the largest smokeless coal companies operating in the State, ran lab tests last year on fuel purchased in areas with a smoky coal ban, including Ennis, Letterkenny, Cork city, Tralee and Sligo.

The tests make clear that some of the coal being marketed in the State as low smoke is anything but, and can contain high levels of harmful particulate.

But how does this happen?

Fuel industry insiders point in one direction when asked what is driving the trade in smoky coal – the Border. Tim Minett, chief executive of CPL Industries, the company which ran the tests, believes that up to 100,000 tonnes is coming across the Border every year – equivalent to about a third of the market.

These fuels are substantially cheaper to manufacture in the UK, and are being driven into the State via the North, he says. A parliamentary question answered in July by Minister for Finance Paschal Donohoe outlines why this is attractive.

Solid fuel sold in the State is subject to the Solid Fuel Carbon Tax (SFCT); however, there is no carbon tax on solid fuel in Northern Ireland. Which, along with several other differences from Northern Ireland, created the incentive – a price arbitrage opportunity – to bring the fuel into the State, Mr Donohoe told the Dáil.

“This factor, combined with that jurisdiction’s lower VAT rate on solid fuel, lower environmental standards and currency fluctuations, can give rise to significant price differentials which incentivises the sourcing of solid fuel from Northern Ireland.”

Mr Minett estimates that the combined difference gives rise to a benefit of about €100 per tonne over a low-smoke fuel. He estimates that about 80 per cent of the 100,000 tonnes of coal coming across the Border is sold as ordinary coal, which simply undercuts merchants paying carbon tax – but that another 20 per cent is high sulphur fuel illegally sold and marketed as smokeless fuel, undercutting business and public health goals.

The quirks of the Border, and the regulatory regime, make it hard to police the movement of the coal across the Border, according to Paschal Donohoe’s Dáil reply in July. EU single market constraints preclude the use of cross-border movement controls in the administration of the tax. “This means that solid fuel coming into the State from Northern Ireland is not subject to cross-border movement controls… Revenue has no authority to stop vehicles and physically inspect loads of solid fuel,” he said.

Similarly, the taxman cannot challenge anyone transporting or possessing solid fuel that originated in Northern Ireland “as such transportation or possession are not, in themselves, Revenue offences”.

Indeed, Mr Donohoe told the Dáil that “there is no smuggling offence, in terms of evasion of SFCT, attaching to solid fuel coming into the State from Northern Ireland”. Or, in Mr Minett’s words: “At the moment you have people running riot in the market with tax-free coals; it’s a complete distortion for the honest merchant, and for the producers.”

In the meantime, local authorities are responsible for enforcing the ban on the actual sale of smoky coal. However, Fianna Fáil TD Brendan Smith, who represents the Border constituency of Cavan-Monaghan, says local authorities lack the resources to police the ban effectively – a situation which will only get worse due to the impact of Covid on their revenues.

“The only way I see compliance being achieved is if we have all the agencies working together and putting their shoulder to the wheel,” he says.

Meanwhile, merchants in his constituency like Tommy Sheehan of North Pole fuels in Cavan, say their business is being undercut by the cross-Border trade. He estimates that about 50 per cent of his business is threatened, and he will be taking on fewer part-time labourers this winter as a result.

“People will ring up from as far down as Cork for a pallet or two of coal; they ring a company up there [across the Border], they employ a courier, they put it on their lorries, it’s then delivered to a housing estate in Cork or Dublin,” he says.

The situation is complicated by the absence of a nationwide ban on smoky coal, which advocates say would clarify matters for merchants and those charged with enforcing the ban. A nationwide ban has been stymied by legal threats from coal companies. Eamon Ryan, Minister for the Environment, has promised a consultation on extending the ban.

However, for now, ongoing issues around the sale of smoky coal continue to hang in the air.