Cork residents advised to remain indoors ahead of Storm Ellen 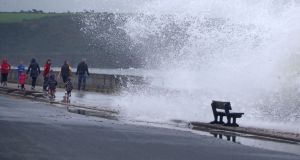 Waves crash on the Front Strand in Youghal, Co Cork on Wednesday evening ahead of the arrival of Storm Ellen. Photograph: Niall Carson/PA Wire

Cork County Council has advised homeowners around the county but particularly in coastal areas to stay indoors on Wednesday evening and to secure their properties in advance of Storm Ellen.

“Property owners, residents and visitors are advised to prepare for this dangerous weather event, to protect property, to avoid unnecessary journeys and stay indoors during the warning periods,” said Cork County Council in a statement.

Those camping or in caravans were urged by the council to seek alternative accommodation indoors, as temporary structures are particularly at risk, prompting thousands of holiday makers in campsites and caravan parks in both east Cork and west Cork to pack up and head home for the night.

According to the council, members of the public are advised to stay high, stay dry and stay away from the coast, rivers and lakes as Storm Ellen hits the Cork coast at around 9pm tonight with the status red storm warning from Met Éireann for Cork remaining in place until midnight.

“Met Éireann has issued a Status Red wind warning for Cork (Storm Ellen) from 21:00 to 23:59 on Wednesday 19th August. Between 9pm and midnight Storm Ellen will produce a core of very severe and destructive winds. Associated heavy rain will also bring a risk of flooding,” said the council.

“Due to the combination of storm surge, spring tides and onshore winds, there is a potential risk of coastal flooding, particularly in the West Cork area. There is a risk also of some inland and river flooding with some potentially heavy, thundery downpours.”

Cork County Council also advised road users to be aware of the danger posed by high winds and possible surface flooding possible and it appealed to motorists to report any fallen trees or road damage to an emergency number 021-4800048.

“Winds will reach violent storm force 11 for a time on coasts. Boat owners should exercise extreme caution on or near the water, ensure vessels are well secured on their berths or moorings and vessel bilge pumps are functioning or pumped out in advance,” said the council.

Cork County Council said it had response crews on standby for the approaching Storm Ellen, in advance of unseasonably wet and stormy weather and was conscious that a Status Orange wind warning would remain in place until 6am tomorrow after the Status Red Storm Warning ends.

“Cork County Council’s Severe Weather Assessment Team have convened in response to this weather warning and reviewed preparations. Council response crews have been put on notice and are on standby,” said the council.

Sandbags will be available at Council depots for areas prone to risk and Council crews will deploy them as necessary, said the council adding it expecting the storm’s impact to include fallen trees and possible structural damage from high winds, flooding in coastal areas and inland and river flooding.

Cork County Council confirmed that Storm Ellen has led to the cancellation of the Dursey Cable Car in West Cork on Thursday while Spike Island Visitor Centre in Cork Harbour and Fota Wildlife Park in East Cork have also closed for the day.

Meanwhile, Cork City Council has similarly issued a storm warning to homeowners in the city and suburbs to make sure that all their properties are secured and they advised people to remove or anchor down wheelie bins, garden furniture, trampolines and other items in their gardens.

“We are preparing to address any damage that might result from the severe winds. Our emergency crews are on standby. We are also asking that all construction sites are made secure in advance of high winds, including plant, materials and fencing,” Cork City Council said in a statement.