Two sea species whose enmity is carried by wind and water

The by-the-wind sailor’s sworn foe, the violet sea snail, floats upside-down alongside it 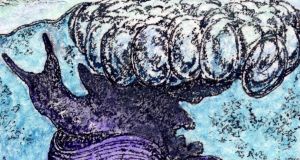 The ultimate ripples of the summer’s long calms have been making gentle deliveries from the pleuston, the world of small, aquatic organisms living on the surface of the sea.

Beachcombing readers are reporting clusters of white-plated barnacles with swollen heads and rubbery necks arriving at the tideline. They look much like the goose-neck barnacles, familiar as dense growths on drifting logs and fish-boxes.

Dosima fascicularis, however, the buoy-making barnacle, can make its own float. The young forms settle on small, drifting particles and exude a buoyant, spongy blob like polystyrene.

The second animal to arrive from warmer waters is one of my favourite examples of design for wind and wave. Velella velella, the by-the-wind sailor, rarely comes ashore as a whole animal. It’s a little hydrozoan, a colony of organisms wrapped in a jelly of deep blue. A shallow fringe of tentacles is venomous enough to stun plankton and small fish.

What usually survives at the tideline, sometimes piling up by the million, is the creature’s float, a flat disc a few centimetres wide. Set diagonally across it is a thin, triangular, flexible sail with a rainbowed, iridescent sheen.

The sail, of chitin, is mounted, compass-wise, from NW to SE or NE to SW. Its shape and sculpture stop it kinking or curling at the bottom in heavy, gusting winds. Tests in a wind tunnel found this “drag-based, locomotory structure” keeps Velella sailing “approximately broadside to the flow of oncoming water”.

The differing angle of the sail takes the animal travelling in different directions, leftwards or rightwards from the wind. Both forms now occur in the north Atlantic and serve the animal’s dispersal across the ocean.

Velella was thought to be confined to the Mediterranean until the 1980s, when the first adult was captured in the north Atlantic by scuba divers. Most of those reaching our waters are said to be left-sailors and once, for citizen science, I gathered handfuls of little floats from the strand and sat in the garden to sort them. Result: 228 were left-sailors; 42 were right-sailors.

That was in 1992, a year of “extraordinary occurrences” of Velella, as recorded in the Irish Naturalists’ Journal. From July to November, millions of its gleaming discs formed drifts along the shore from Cork to Mayo, piling up deeply in the rock pools and gullies of Connemara and against the nets of salmon farms offshore.

As an animal of all the world’s oceans, driftlines of dying Velella are a widespread phenomenon. On the Pacific coast of North America, most springs find them stranded, to some extent, on beaches from British Columbia to California, and “massive” strandings are regular in the northwest Mediterranean.

In 2006 New Zealand entered its first mass stranding in biodiversity records as many millions piled up, metres wide, along west coast beaches (most, again, were left sailors). In today’s chemically sensitive thinking, the mass decay of Velella is considered for its role in the planet’s cycling of carbon.

Given the extraordinary abundances of jellyfish in widely separated marine ecosystems, Ireland has shared global concern at the impact of toxic species on aquaculture, fisheries and swimmers driven from the waves.

The exceptional blooms of jellies are widely blamed on climate change and the warming of ocean ecosystems. But a study by 22 researchers, published in 2012 by the US National Academy of Sciences, found the answer in “a pattern of decadal oscillations in jellyfish populations that have occurred for at least a century”.

Their consumption of planktonic life competes with that of commercial fish. A research team led by UCC’s Tom Doyle studied the diet of Velella caught up in floating rafts of seaweed in the Celtic Sea and found a preference for fish eggs and small fish.

But Velella has its own predators. Leaving aside an estuarial feed by mallard ducks, prompting a report headed “Quacks snack on smacks”, and the more regular intake by oceanic turtles, the animal’s closest enemy floats alongside it, upside down.

Janthina janthina, the violet sea snail, is suspended from a raft of silver bubbles. It makes this by lifting its foot above the water and trapping morsels of air in mucus that hardens into something like cellophane.

Drifting beneath this scrap of froth, the graded colour of its shell, deepening to violet blue, has a function, helping to conceal it from the downward gaze of seabirds and the upward gaze of fish.

Like so many carnivores, Janthina eats whatever it comes across, and its seemingly random encounters with Velella depend on the vagaries of wind that governs both their lives. But in any substantial stranding of Velella, the empty shells of Janthina are also likely to be there on the sand, sometimes – if rarely – in hundreds.

Their beauty makes them treasures. But pick them up gently, or a squeeze will shatter them to bits.