Cigarette butts are one of the ‘most common’ forms of litter, survey finds 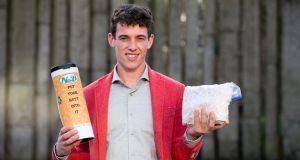 A new start-up aims to eliminate the problem littered cigarette butts in Ireland by repurposing them into solid plastic objects such as sunglasses and other consumer products.

Nobutts.ie, the brainchild of a group of undergraduate students at UCD, also hopes to reduce the amount of “virgin” plastic being produced for these products by encouraging consumers to opt for products made out of recycled materials.

Mike Wylde (21), from Nobutts.ie, says the company removes the paper from the cigarette filters, cleans the plastic and then renders it into a new form that can be used by industry to make “any solid plastic shape”.

They also remove nicotine and any hard metals, such as arsenic and lead, from the filter.

“From being a cigarette filter which is limited to just being a piece of trash, we bring it back to a material with lots of opportunity,” Mr Wylde says.

“I think if people realise they can be reused, they’ll be more likely to find a bin for their butts, rather than doing a target practice at drains. It’s a priority of ours to enable every smoker who wants to recycle their butt, to enable them to recycle them by having sufficient receptacles.”

The business currently works with a number of hotels, bars and hospitals, to ensure cigarette butts are kept separate from rubbish bins and can be repurposed.

The company also seeks to place specific bins for used filters in “problem spots” around the country.

Nobutts.ie will be releasing a range of sunglasses for the upcoming summer season, before branching out into other products later this year.

“Our brand is essentially going to be a brand that shelves products that are made of ‘x amount’ of butts. It awards the consumer the opportunity to feel as though they took, let’s say, 700 butts out of nature,” he added.

The new business idea comes after the most recent Irish Business Against Litter (Ibal) survey found that cigarette butts are one of the “most common” items of litter on streets across the State.

Speaking at the ceremony which announced the award winners, Ibal’s Conor Horgan said littered cigarettes can often have a huge impact on coastlines and water.

“Cigarette filters are essentially single-use plastic which readily winds its way into our sewers and rivers, adding to the problem of plastic pollution, which threatens to see more plastic in our oceans than fish by 2050. Yet every day we see people nonchalantly flicking butts onto our pavements,” Mr Horgan said.

Ibal is funding a pilot programme of cigarette butt collection points in Kilkenny city after it was named the cleanest town in the 2019 survey.