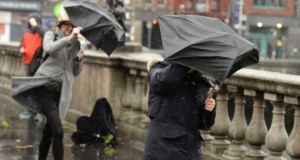 A status yellow wind warning has been issued by Met Éireann for seven counties this morning.

The wind warning for Donegal, Galway, Mayo and Kerry is valid from midnight on Sunday until 8am on Monday when southerly winds will reach mean speeds of 50 to 65 km/h with occasional gusts of 90 to 100 km/h.

A second wind warning issued by Met Éireann on Sunday is for Wexford, Cork and Waterford where gusts of 90 to 100 km/h are expected early on Monday. The alert for these three counties comes into effect at 3am on Monday and is due to expire at 11am.

A status yellow gale warning has also been issued for the marine sector. Southerly winds will increase through Sunday and Sunday night to reach gale force on all Irish coastal waters and on the Irish Sea.

Apart form wind on Monday, rain in western areas will move quickly eastwards in a heavy and persistent band. It will clear the west early and the east by lunchtime.

As the rain clears the winds will veer westerly and ease for a time and the sun will come out with just a few showers to follow, most frequent in the north.

It will become cooler as the rain clears with afternoon temperatures of 7 or 8 degrees.

The outlook for the midweek period is uncertain with an area of low pressure tracking northwards over the country giving changeable wind patterns and bringing outbreaks of rain from the south.