Temperatures will reach the mid-20s in the greater Dublin region, north Leinster and east Ulster on Monday 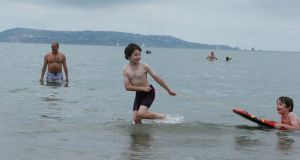 Temperatures are set to reach as high as 28 degrees in parts of Ireland over the coming days, forecasters are predicting.

Met Éireann says the east of the country especially can look forward to basking in warm, sunny, summer weather on Monday and Tuesday.

“Temperatures will reach the mid-20s, particularly in the greater Dublin region, north Leinster and into east Ulster on Monday,” said forecaster Matthew Martin.

Mr Martin said Tuesday looks like it would be “another good day” with temperatures ranging from the mid to low 20s, before conditions turn more unsettled again by mid-week.

The likes of Galway and parts of the south and west coasts might be “a bit cloudier” than the rest of the country.

The warm, sunny spell is expected to follow widespread rain on Sunday.

A low pressure coming in off the Atlantic should bring downpours moving along the west coast, spreading to much of Munster, Connacht and Ulster during Sunday morning.

By the afternoon it will spread to the east, said Mr Martin, however the rain is expected to be heaviest in the west and north.

Saturday is predicted to remain mostly dry, with a fair amount of cloud, some sunny spells and the odd light shower in the west and north. Temperatures will vary between 17 degrees and 21 degrees with some light moderate westerly breezes.