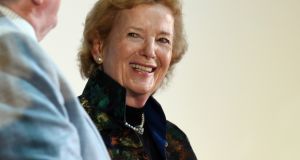 She was speaking at the Galway International Arts Festival on Saturday on climate change, as “possibly the single most important issue facing humanity”.

But her message was one of hope as she detailed steps people can take themselves to make an impact.

The first of these, she said, was to “make climate change personal in your life, because it so important. When you go out the door, make up your mind to do something you weren’t doing this morning,” whether recycling, or switching off lights, or using less water, or getting rid of waste, or using public transport. “Do something that is your ownership of the climate issue.”

She uses public transport and has given up meat.

Secondly, she urged people to “get angry and get active”. Governments, especially of rich countries like Ireland, need to be more ambitious in their plans, and have to implement their plans, she said. We need to voice support for those working hard. And “we need to be disrupted”.

Her third step is to “imagine this world we are hurrying towards”. Scientists said we have 12 years for the planet to change direction - “that’s now 11 years” - and she encouraged people to imagine this healthier, more equal world with clean energy. She gave an example of envisaging that better world, instancing Grafton Architects’ exhibition at last year’s Venice Biennale, where the Irish firm invited architects to respond to a brief where “the earth is your client”, and “showed us a circular economy”, with electric transport, reuse of materials, and ways we can “live together in a different way”.

“Scientists say it is possible [to change things] if we have the political will,” she said, and we need sustainable development goals.

She talked about a declaration at the UN from women leaders, saying “the time has come where women have to take over”.

Ms Robinson said “climate change is a manmade problem with a feminist solution”. But her message was inclusive: “manmade” is a generic term, and feminists include women and men - “feminist solutions need more men” working for an answer to climate change, based on equality and fairness.

Quoting the South African Archbishop Desmond Tutu who is known for his work as an anti-apartheid and human rights activist, she exhorted people to become “prisoners of hope”, when looking at the challenges of climate change.

When Archbishop Tutu was asked why he was such an optimist, he described himself instead as a prisoner of hope, she said.

Ms Robinson said “the glass may not be half full”, but “you work with what is in the glass, and become more resilient and do what is necessary”.

The author of Climate Justice, former president of Ireland and UN High Commissioner for Human Rights, was speaking at a sold-out session about climate change at NUI Galway in the First Thoughts discussion strand of the Galway International Arts Festival. She was introduced by Professor John Sweeney, climate change expert.

1 Ireland-Italy rugby match due to be called off over coronavirus risk
2 Girl (11) denies making up allegations of abuse by creche worker
3 Dublin man may have been stabbed to death by woman in parking space row
4 Could Ireland put towns under lockdown if coronavirus arrived?
5 Father-of-three found guilty of murdering Patricia O’Connor
Real news has value SUBSCRIBE

Council takes legal action over street mural of David Attenborough 19:17
Ireland-Italy rugby match due to be called off over coronavirus risk 19:07
Watchdog ‘disappointed’ with review of State’s lobbying Act 19:05
Could Ireland put towns under lockdown if coronavirus arrived? 19:00
EU issues ultimatum to London ahead of Brexit talks 18:54