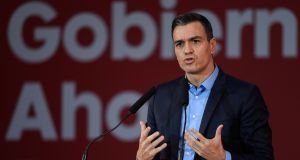 Spanish prime minister Pedro Sánchez: offer to host COP25 will be studied by the UN climate change panel at a meeting in Bonn next week. Photograph: Josep Lago/AFP via Getty Images

Spain has offered to host the COP25 UN climate conference in December after weeks of violent protests forced the Chilean government to cancel both the global environmental meeting and next month’s Apec trade summit.

On Thursday afternoon, the Spanish government said the acting prime minister, Pedro Sánchez, had offered to help the Chilean president, Sebastian Pinera, “in any way that might be needed – including hosting the summit in Madrid”.

In a statement, it added: “Spain believe that multilateral climate action is a priority for both the UN and the EU, and one which demands the highest commitment from all of us.”

The Spanish government said its offer had been relayed to the UN by Carolina Schmidt, the Chilean environment minister who is also the president-designate of COP25. It will now be studied by the UN climate change panel at a meeting in Bonn next week.

Mr Pinera had blamed the “difficult circumstances” Chile was facing for the decision to withdraw from hosting COP25, and said his government’s primary concern had to be “fully restoring public order, security and social peace”.

“This has been a very difficult decision – which has caused us great pain – because we understand perfectly the importance [of the events] for Chile and for the world,” Mr Pinera said on Wednesday as he announced the decision.

“It is encouraging to see countries working together in the spirit of multilateralism to address climate change, the biggest challenge facing this and future generations,” she said in a statement.

Chile’s protests began in mid-October as a student-led fight against a 3.7 per cent hike in metro fares. But the demonstrations quickly swelled into a much broader mutiny against inequality, the cost of living and police repression.

According to Chile’s Human Rights Institute, 3,535 people have been arrested since October 17th and 1,132 have been taken to hospital, 38 of them with gunshot injuries.

On October 18th Mr Pinera declared a state of emergency after violence broke out on the streets of the capital, Santiago. He later declared the country was “at war” with “evil” delinquents.

After failing to quell the unrest, Chile’s president tried to placate protesters with a conciliatory televised address in which he asked forgiveness for the “shortsightedness” of the country’s political leaders. – Guardian