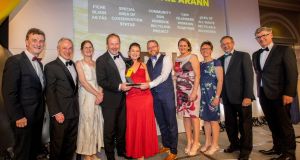 The Aran Islands Co-op Recycling Project has been awarded the top prize at the 2019 Pakman Awards for its work transforming waste and recycling infrastructure on the Aran Islands.

The Pakman Awards, launched in 2015 by Repak, are national awards that recognise excellence in waste management and recycling.

The awards ceremony took place in Dublin with 400 representatives from businesses, organisations and community groups gathered.

Over the past 20 years, the Aran Islands Co-op Recycling Project Athchursail Árann has eliminated three landfill sites and creating a community-run kerbside recycling system for dry packaging and compost.

As part of the recycling project, dry recyclables are baled and sent to Galway; food and organics are composted; and residual waste is examined for reuse projects such as glass being crushed for use as aggregates for concrete, timber being shredded to go into compost, and bulky items, such as old windows, being stored for reuse on agricultural and garden sheds.

The Galway Island organisation also won the “community recycling initiative” category – and has previously won awards for adopting renewable energy. It operates in a challenging island environment including areas with Special Areas of Conservation status under the EU Natural Habitats Directive.

Minister for Climate Action and Environment Richard Bruton congratulated Athchursail Árann, “who have had a transformative impact on the Aran Islands”.

On efforts to reduce waste and improve recycling, he said: “As set out in the Climate Action Plan, managing our resources efficiently is crucial as we move towards a more sustainable, resilient society. We must step up – 70 per cent of food waste is avoidable, half of the material we use is not being segregated properly, two-thirds of plastic used is not on the recycling list, and labels are confusing.”

Under the plan, it is intended the use of non-recyclable plastic will end, food waste will be halved, there will a ban a number of single-use plastics and dependence on landfill will be cut by 60 per cent.

Businesses, community groups and organisations being recognised had shown the impact that is possible through careful use of resources, Mr Bruton said. “They have set an example for others to follow, and I’d encourage others to follow their lead and take action.”

The Minister commended Coca Cola, winner in the inaugural “Repak plastic pledge member of the year” category that was open to some 90 Repak members who have signed a “plastic pledge”, committing to achieve specific objectives relating to reducing plastic packaging and increasing the recyclability of their packaging.

Castletroy College in Limerick picked up two awards; the “environmental education and awareness initiative” and “battery champion” categories. Teachers at the 1,200-pupil school in Limerick successfully integrated educational material into their Junior Cycle curriculum to raise awareness of the circular economy and the importance of recycling e-waste.

Under this programme, in 2019 the school collected 10,715kg of electrical and electronic equipment for recycling, collected and reused 68.5kg of electronics, and was placed first in the Europe-wide EIT KIC Raw Materials School Competition.

UCC won the “innovation in waste resource products or services” award, sponsored by Ibec, and will be considered for entry into the 2020 European Business Awards for the Environment, Europe’s premier awards programme for sustainable businesses.

Other winners included burger outlet Bujo in Dublin, picking up the “Food Waste Management” award for its recycling of 95 per cent of its food waste to energy and other innovative initiatives; RTÉ, for the “Business Recycling Champion” award; and Dillion Waste for the “Green Transport of the Year” award.

The waste recycling and recovery facility of the year was Irish Packaging Recycling, and Recycle IT won the award for WEEE (Waste Electrical and Electronic Equipment).

Congratulating the winners, Repak chief executive Séamus Clancy said: “We live in an era when recycling and waste management are of paramount importance to the public, businesses, the Irish Government and the EU. The world’s attention is now focused on the health of our ecosystem, what we can do to reverse climate change, and how we can minimise our environmental impact.”

The winners and nominees in the 2019 Pakman Awards were “some of our nation’s best examples of the great work being done to tackle these issues”, he added.