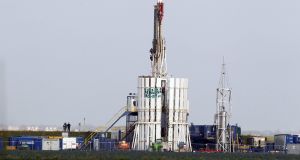 The Government will not support any grant application for EU funding by the Shannon liquefied natural gas (LNG)project until “a security of supply review has been completed and considered by the Government and by the Dáil”, Minister for Climate Action and Environment Richard Bruton has said.

Responding to criticism of the controversial project being listed as of strategic importance, Mr Bruton said: “At this stage, other than the streamlining of the permit granting processes, the only practical benefit to Shannon LNG being designated as a project of common interest (PCI) is the possibility of applying to the Connecting Europe Facility for grant aid.”

The Government’s continuing classification of the project as a PCI has been criticised by the environmental group An Taisce as a “a profoundly retrograde step totally at odds with Ireland’s climate targets and existing national ban on fracking”.

The notion of opening a large terminal to facilitate importation of fracked gas from the US after Ireland has introduced a domestic ban on fracking on environmental and health grounds “defies all logic and flies in the face of expert scientific advice regarding emissions reductions,” it said on Wednesday – the deadline for withdrawing projects on the list.

Fracking is a technique in which high-pressure water, sand and chemicals are pumped into shale rock to help extract natural gas.

“Ireland is one of the most dependant countries on fossil fuels,” Mr Bruton underlined. The Government had a fundamental duty to protect Ireland’s energy security, he added.

“In the next decade we will fully exit from peat and coal to generate electricity and we will reach 70 per cent renewable electricity. In making these critical changes, we must ensure our energy security is maintained. It is critical to protecting our people, our homes, our farms and our businesses.”

The balance will still have to be generated from fossil fuels, and from interconnectors and energy storage in 2030, the Minister said. “Back-up supply will be needed in particular when the wind isn’t blowing and when the sun isn’t shining.”

Back up supply is likely to be provided by gas, Mr Bruton added. This view was backed in advice of the Climate Change Advisory Council that said continued exploration for, and recovery of new offshore natural gas reserves could be consistent with a low-carbon transition.

“However, we will carry out a comprehensive energy security review. It will consider, in a scientific way, how and where fossil fuels are sourced from during a transition to a carbon neutral economy. [IT]will consider: how we generate electricity when the wind isn’t blowing and the sun isn’t shining, the role for battery storage and the role for gas powered back up; the role of interconnection (both gas and electricity); and others way to back up our power supply.”

Shannon LNG has been designated as a PCI by the European Commission for six years. The Minister, none the less has asked the commission if a review into the implications of importing LNG, both conventionally and unconventionally extracted, into the EU have been examined “in terms of a sustainable, secure and competitive European energy policy; and if not, that it should be undertaken”.

The commission has confirmed inclusion on the PCI list “does not mean the project has at that time complied with all environmental obligations under EU legislation”.

“In most cases, it is far too early in the project development for this to be the case. However, all projects on the list must comply with all environmental legislation requirements as they develop,” Mr Bruton confirmed.

An alliance of politicians, NGOs and health experts recently called on the Taoiseach asking Ireland to block the Shannon project on the basis it would “re-energise the fracking industry and increase human suffering and pollution in the affected areas, particularly Pennsylvania in the US”.

“The science is now clear that natural gas is not a ‘transition fuel’ – it is a steep cliff to climate catastrophe”, An Taisce added. “This project locks us into an unsustainable, fossil-fuelled energy system for the foreseeable future, using fracked gas, which may be as environmentally damaging as coal or even peat burning.”

Apart from emissions from burning the fossil fuel, fracked gas contaminates groundwater and soil, leads to substantial fugitive methane emissions and can increase the risk of earthquakes, it said.

People Before Profit TD Bríd Smith said: “This decision by Minister Bruton to press ahead and place the Shannon LNG terminal on the PCI list puts to bed any idea that the Government are interested in climate action.”

Last week Sweden withdrew an LNG project terminal in Gothenburg from the PCI list, citing concerns over climate change. Two other linked projects that would have seen a reverse interconnector pipeline between Ireland and Scotland were removed from the list after the EU’s Agency for the Cooperation of Energy Regulators (ACER) found they “did not prove that their overall benefits outweigh costs”.