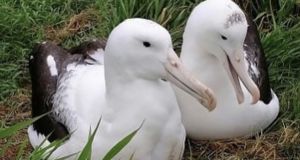 Royal albatrosses spend three or four years courting before they are ready to take care of an egg together. Photograph: The Royal Albatross Centre

A royal albatross named Rob has delighted New Zealand conservation workers by settling down with a new mate after 10 years on his own.

Rob (35) and named after the red, orange and blue bands around his leg, is part of the world’s only mainland breeding colony of royal albatross – majestic birds with wingspans of about three metres – at Taiaroa Heads on the Otago peninsula, near the bottom of the South Island.

The fact that he had failed to find a partner “has amused us for some years”, said Hoani Langsbury, an ecologist and operations manager for the Otago Peninsula Trust. Local conservation workers have “almost run a book” on Rob’s chances of finding a partner each time he returned to the colony.

Four of Rob’s previous partners have died, while others have not stuck – and no one knows why. Langsbury noted that the dating pool was small, with about 200 adults in the colony.

“To look at him, he’s not much different than any other bird, but we’re not looking at it through a bird’s eyes,” he said. “Maybe his song isn’t quite right and nobody likes it.”

Rob’s single status wasn’t for want of effort; he had been the first bird to return to the colony for mating season in several previous years. But relationships in the albatross world take time.

After chicks first leave the colony, the birds, who spend most of their lives at sea, return as five- or six-year-olds, Langsbury said.

“They start hanging out like at a disco with all the other teenagers, looking for a partner. If they’re lucky they might find one that first year,” he said. “If they don’t, they leave and return the next year to try again.”

Three or four years of courtship often follow before the birds are ready to lay an egg together. The parents then share a lengthy incubation process and guarding duty for the new chick.

Langsbury hoped Rob, who has raised three chicks so far, would breed with his new partner, who also had a chequered relationship history. “She’s a successful breeder,” he said. “She’ll know what to do.” – Guardian