Funding for Government departments to drop if climate action not taken

Penalties will apply where departments do not meet targets, including carbon reduction 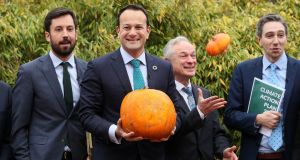 Government departments and agencies under their remit which fail to deliver on climate action commitments will be punished with reduced funding when it comes to determining their annual estimates, the Government has confirmed.

This mechanism will be a key element of five-yearly carbon budgets, legislation for which is due to be published by the end of the year, Minster for Climate Action and Environment Richard Bruton said.

Details of the penalties were revealed at a briefing in Dublin on Thursday on progress in implementing the Government’s climate action plan. Published in June, this sets out actions to be implemented by 13 Government departments and 40 agencies under their remit.

Taoiseach Leo Varadkar said the Government was prepared to take unpopular actions, such as increasing carbon tax, as it was an essential part of the mix to change behaviour.

“The greatest reason for the failure to deliver climate action of the scale needed to date has been the absence of sectoral accountability. It has always been somebody else’s problem; another department, another agency or another sector in the economy is to blame,” he said.

The climate plan set out what each sector needed to do over the next decade, and the Climate Action (Amendment) Bill would put in place carbon budgets including penalties for non-delivery.

“The old way of doing things has not worked,” Mr Varadkar said.

He added 85 per cent of actions had been delivered on schedule and there was a need to concentrate now on the remaining 15 per cent. Ireland was reducing carbon emissions but “not nearly fast enough”, he said.

Of 176 measures earmarked for the second and third quarters of 2019, 149 were complete or on schedule and 27 were delayed. Of measures not in place, “resource constraints (often human rather than financial) and lengthy procedural issues were most commonly cited as the reasons for delay”, the progress report said.

The main delays were in forming carbon budgets from 2021, which would limit what each sector in the economy was permitted to emit in the form of CO2.

In addition, updated planning guidelines for onshore wind were overdue, the report said. Reform of marine area legislation will be conducted separately to facilitate massive expansion of offshore wind.

The report also cited a delay in increasing “the volumes and frequencies of renewable electricity support scheme auctions” to achieve a 70 per cent renewable electricity target by 2030. A number of transport measures have been delayed due to public consultation, while a roadmap to decarbonise public transport has yet to be completed.

Milestones identified included the introduction of requirements to ensure new homes are of “nearly zero energy” buildings standard, commitment to support net-zero emissions at EU level by 2050 and a phased end of oil exploration in Irish offshore waters.

A retrofitting model taskforce has been set up to deliver a new national retrofitting plan which will group homes in the same area together to lower cost, with easy pay-back options through utility bills.

“This marks good progress but we must consider what barriers exist to achieving 100 per cent delivery and make sure we keep pushing across the board,” Mr Bruton said.