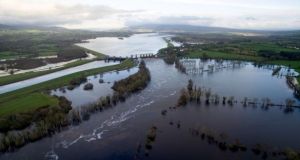 Groups opposing Irish Water’s €1.3 billion plan to pipe water to Dublin say the capital’s supply issues should be deal with by fixing leakages.

The proposal to spend €1.3 billion on extracting water from the Shannon and building a 170-kilometre pipeline to convey it to Dublin should be subject to independent review.

The call was made by Sinn Féin TD Eoin Ó Broin after hearing sharp differences of opinion on the exact scale of Dublin’s massive water leakage problems from Irish Water and campaign groups against the proposal.

Conflicting figures were presented to the Oireachtas Committee on Housing, Planning and Local Government on Wednesday, when consultant Emma Kennedy, who is advising the groups, said the utility’s analysis contained false statements and mathematical errors which, if corrected, would show there was no need for the project.

He rejected claims there was 57 per cent leakage of water in Dublin. The network had a leakage rate of 37 per cent, amounting to 207 million litres a day, he said. Pipes were being replaced at a rate of 1 per cent a year, the maximum possible “without bringing the city to a standstill”.

Given 2 per cent population growth, Dublin would barely be able to meet demand up to 2025, he added.

While he said he would not question Ms Kennedy’s bona fides, the claim that the utility had made errors on data “misrepresented” its analysis. Mr Grant estimated domestic leakage at 6 per cent.

Ms Kennedy said the correct rate of leakage was 57 per cent; this included 19 per cent “customer-side leakage” from inside people’s homes and under their gardens.

The problem was not a lack of water and only about 43 per cent of the water put into Dublin’s water supply system every day was actually being used, she maintained.

Excessive leakage and water outages were the key issue, Ms Kennedy said. “Dublin’s pipes are so old and fragile that when they come under an extra stress (such as during a cold snap) they give way.” In addition, Dublin had unreliable water quality “in low pressure situations” (as arise when pipes burst) as contaminated groundwater leaked back into pipes carrying clean water to taps.

“There is a perception that pumping water from the Shannon to Dublin would fix Dublin’s problems. That is wrong. The Shannon would offer no diversification away from [over relying on] river water ... the only thing that can stop Dublin having water outages and suffering from water ingress is replacing its pipes,” she said.

Mr Ó Broin said what was possibly the largest infrastructural project in the State’s history should be subject to independent scrutiny. He accepted Dublin needed to diversify its water sources and increase supply, but significant questions had arisen. The idea that €1.3 billion be spent and the Dublin region would still have a leakage rate of 44 per cent was “hard to reconcile”.

Given the scale and cost of the project, it should be subjected to independent assessment, he added.

Mr Grant said Bord Pleanála would provide the ultimate independent assessment, but Ms Kennedy said it would not address issues she had raised by way of forensic economic analysis.

Speaking at a press conference after the committee hearing, Liam Minehan of Fight the Pipe said aside from devastation the pipeline would cause to his dairy farm. “I cannot accept a proposal to take water [from the Shannon] to a city that doesn’t need it,” he added.