Measuring some 300,000km, their value to biodiversity remains paramount 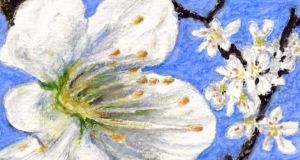 Looking out from my desk through a skeletal weave of branches, I glimpse the white blur of a grazing ewe moving closely beyond the hedge, the patch of azure sprayed on her back as suddenly bright as bluebells. Her lamb comes following, a little blob in a whiter shade of pale.

On this windy, small-farm hillside, striped with earth banks and fences a century ago, a hedge is rare but worth its keep for shelter. In Ireland’s wider landscape, the green network sometimes seems to separate farming life from proper care for nature,

It is quite a few springs since the Irish Farmers’ Association began lobbying to shorten the closed season for cutting or grubbing out hedgerows and burning upland habitats. A compliant ministerial response from Heather Humphreys, in the new Heritage Bill of 2016, has brought outrage from environmental NGOs, a public petition and trenchant resistance in the Seanad.

A general election and a change of heritage minister both delayed the progress of the Bill, still to be given Dáil approval.

Earlier this month, the National Parks and Wildlife Service (NPWS) took care to warn that the old provisions of the Wildlife Act are still in force; there must be no destruction of hedges or burning of vegetation from March 1st to August 31st. Its website asked the public to report offending actions to local NPWS offices.

When, at some point, the Bill gets its final Dáil discussion, one change might be permission to cut roadside hedges (on the relevant side) during August, whatever the worries for late-nesting birds. An Taisce, out to grant the positive, thinks this would leave three-quarters of our hedges safely intact through the critical months for wildlife.

At some 300,000km, Ireland’s hedgerows are the essential corridors of nature, for all the gaps and scrawny bases of so many. Their condition and ecology are under close assessment – even of their ability to absorb tonnes of CO2. But their value to biodiversity is paramount and still has much to do with their history.

Most were planted from the mid-1700s up to the mid-1800s, the years of the countryside’s enclosure, but our oldest hedges are medieval or even earlier. In Gaelic Ireland, strips of woodland were kept for timber and fuel. Hedges were planted on earth banks as defences and ditches dug to mark townland boundaries. Some still survive as treasuries of rare and species-rich ecosystems.

Banks and ditches are often synonymous in Ireland’s vernacular usage.

“The age of a ditch” was the title for an email from a Co Tipperary reader, Rachel Vaughan. She wondered how to date the age of a nearby townland boundary where a hedgebank is growing ash, sycamore, holly, hazel, beech, hawthorn, blackthorn and willow, all within quite a short distance.

Wasn’t there, she asked, some sort of formula that said if you counted, say, five woody species in a specified length of hedge, this meant it had been there for five centuries? What was the crucial distance?

In an extensive survey, he found that the number of trees and shrubs in 30m of hedge did, indeed, seem to match the centuries, as confirmed by local and documentary evidence.

With such a different rural history, Hooper’s Rule made slow headway in Ireland. But as counties nationwide embarked on hedgerow surveys of their own, assessment for conservation came to need consistent methods and classification. The resulting Hedgerow Appraisal System describes and ranks the current condition of hedgerows, and their age brings the greater potential as refuge and source of species.

The system is the work of ecologists in Woodlands of Ireland and allied NGOs, funded by the Heritage Council and backed by National Biodiversity Ireland. Hedgerows there are rated for “significance”, and the highest score defines “heritage hedgerows” of greatest conservation priority. They tend to be on ancient boundaries shown on the old 1-inch maps and have a double-bank structure and a stream or river running by.

Borrowing the 30m measure from the UK, “high significance” is gained by strips with 10 or more species of tree, shrub and climber, half a dozen plants from a long native list, and perhaps five kinds of fern. If the hedge has links to a designated woodland, so much the better.

The system will be discussed by one of its authors, Dr Janice Fuller, at a major conference on Ireland’s native woodlands next Monday and Tuesday at the Glenview Hotel, Delgany, Co Wicklow (see woodlandsofireland.com).

The event celebrates 20 years of work by Woodlands of Ireland to manage existing native woods and create new ones. Their value, with that of hedgerows, to flood management is one of the leading topics for the conference, with more than 20 expert speakers.