Scientists warn that drought could get worse as little rain forecast 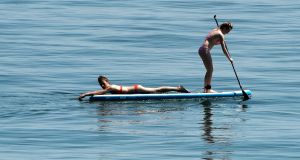 Cooling off near Killiney Beach during the heatwave earlier this summer. Below-average rainfall levels have been forecast for August and September. Photograph: Cyril Byrne

Dublin is experiencing its worst drought since records began in 1850, and scientists at Maynooth University are warning that “we are potentially far from done yet” when it comes to unusually dry weather.

Long-term forecasts from the European Centre for Medium-Range Weather Forecasts and the US National Oceanic and Atmospheric Administration predict below-average rainfall levels for August and September.

Prof Peter Thorne, Dr Simon Noone and Dr Conor Murphy, of Maynooth’s Irish Climate Analysis and Research Unit (Icarus) conclude in a blog post that the seasonal forecasts for the next two months “show a real possibility of the meteorological set-up that led to the current drought returning and persisting”.

“Don’t be fooled by a week of recent rains,” they wrote.

The weather station in Dublin’s Phoenix Park is recording an extreme drought in the capital based on its Standardised Precipitation-Evapotranspiration Index (SPEI). It records the amount of rainfall it would take to return the soil to normal levels of moisture as well as the rate at which moisture evaporates in warm conditions. The SPEI index was at minus 2.7 in July – a figure of zero is normal while a minus 2 reading indicates extreme drought.

The short-term Met Éireann forecast suggests showers should arrive in the coming days, but all the long-term models forecast that the volume of rainfall needed for a return to normal conditions is unlikely to come.

Irish Water this week warned that Dublin would run out of water in 70 days in a “worst-case scenario”. The utility firm is pressing for Dublin’s long-term water needs to be met by pumping water from the Parteen Basin in the Shannon to the capital and has said it will be “surviving” on reducing leakage in the capital until the Shannon project comes to fruition. The Shannon move is, however, likely to face resistance from those living along the river.

Dr Murphy, a lecturer in geography at Maynooth, said water supply is on “the brink of what is possible with current resources”.

“I don’t personally foresee Dublin running out of water,” he said. “This is a worst-case scenario, but it speaks to a city that is on the edge in terms of water resources and infrastructure. That needs to be taken on board and conservation measures maintained.”