49 people drowned in Irish waters so far this year 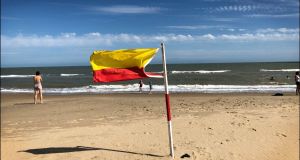 Forty-nine people have drowned in Irish seas, rivers and lakes so far this year, Irish Water Safety (IWS) has said.

The summer bathing season, which lasts from the start of June to September 15th, has been the busiest in living memory, the water safety body said.

So far this summer, lifeguards have saved 149 lives, as the heatwave in June and July brought an unprecedented number of people out to enjoy the water in the sun. Lifeguards provided first aid to 1,189 people, and reunited 113 lost children with their parents, IWS said.

Generally lifeguards are stationed at beaches on the weekends in June, but due to the exceptional weather many local authorities had lifeguards on duty during the week as well.

As August is one of the most popular months for people to go swimming, the organisation is appealing for the public to take precautions and reduce the risk of getting into trouble in the water.

“Drownings often happen quickly and silently with 80 per cent of drownings occurring within the home county of the victim. Alcohol is a factor in one third of drownings” a spokesman for IWS said.

Last year 109 people drowned in Irish waters, 84 were male and 25 were female. “Males overestimate their skills and competencies and underestimate the risk and danger,” the spokesman said.

The organisation issued a set of safety guidelines for people to follow when bathing in the water, ahead of the August bank holiday weekend.

The safety tips included only swimming in water where there is a lifeguard on duty, to swim within your depth, and to go into the water with others.

“Never use inflatable toys in open water or swim out after anything drifting,” the safety body said.

Anglers and boaters should always wear a lifejacket when out on the water, and children should be supervised at all times near water, the guidelines say.

In the last 10 years 30 children aged 14 years and under have drowned in Irish waters.