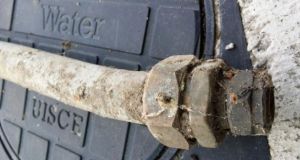 Options open to Irish Water, should the crisis continue, include extending restrictions beyond the current Level Two measure in place. Photograph: Frank Miller

With “very little rain forecast” for the forecastable future, Irish Water met with the State’s emergency management planners to discuss whether further water restrictions will be needed.

On Wednesday morning Irish Water and the Environmental Protection Agency (EPA) which monitors low water levels, held a meeting in Dublin with officials drawn from the State’s emergency management teams to review the water crisis.

Irish Water officials gave an update on 20 water schemes outside of the greater Dublin area that have been under pressure to meet demand. A spokeswoman for Irish Water said the regional schemes were “holding steady” in terms of supply, and there had been no immediate change in recent days to require further conservation measures.

The spokeswoman said it is likely to be Monday before a decision is taken on the potential need for further restrictions.

She said a week-long monitoring of consumption began on Monday night and data from this will be used to check if current night time reductions in pressure is having the desired effect on conserving scarce water resources.

The spokeswoman said new sources of water were being sought as the drought continued and levels in rivers and lakes continued to decline.

The options open to Irish Water, should the crisis not abate, are to extend the restrictions beyond the current Level Two restrictions which are in place in Dublin. Level Two involves a reduction in the pressure at night-time to the minimum that is practical for normal pressure to reach the ground floor of a two storey house. Currently water is restricted from 10pm to 5am in the city centre, and 33 suburbs.

Next week Irish Water will look at the potential need to move to Level Three which would involve most customers experiencing low night-time pressures, but no complete loss of supply. Supply to some customers on high ground and at remote end of networks would reduce to slight flow at kitchen sinks during those periods. Customers in multi-storey buildings would experience low night-time pressures depending on their building’s pumping and storage system. The time period for Level Three would start from 9pm and last until 7am.

National director of fire and emergency management at the Department of Housing, Planning and Local Government Sean Hogan said the team had been reviewing the water situation since June “meeting not as the National Emergency Co-ordination Group, but the same people were “making sure the right people were in the room” as the crisis continues.

According to the EPA, rivers including the Liffey in Dublin, Nore in Co Kilkenny, Deel in Co Limerick and Feale in Co Cork are among a long list of water sources which are approaching record low levels.

Meanwhile Northern Ireland Water announced it was lifting a national hosepipe ban that has been in place since late June. A similar ban on households using their garden hose to water plants, and wash their cars or gardens is to remain in place in the Republic until the end of July, at which point Irish Water will review the situation.

Met Éireann said its forecast for the coming week involved “ a lot of dry weather”, and while there would be some rain or showers expected, they would be generally small.

Friday is expected to be cloudy and misty, with outbreaks of rain and drizzle in many areas for a time .

Saturday and Sunday will both be mostly dry days, cloud cover will vary, but sunny spells should develop in all areas. Top temperatures will generally range from 18 to 21 degrees.