Farmers urged to reach out to friends during fodder crisis 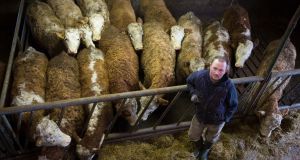 Tommy Moyles, Ardfield, Clonakilty, Co. Cork, said that it is vital farmers show solidarity with each other following a horrendous winter. Photograph: The Farmers Journal.

Farmers who are feeling under strain during the fodder crisis need to reach out to each other to discuss feelings of depression and isolation in what at times can be a difficult livelihood, according to individuals and groups within the sector.

Tommy Moyles, who operates a beef farm in Ardfield, Clonakilty, Co Cork said that it is vital farmers show solidarity with each other following a horrendous winter.

“I would say [to farmers] that they should keep the heads up and talk to people. It is our second one [fodder crisis] in five years. There are farmers under a lot of pressure at the moment.”

Mr Moyles urges farmers who are caving under the difficulties relating to the fodder crisis to consider the other challenges they have endured in recent years. He recalls 2012 as being a particularly “nightmarish” year with the road from his farm being “nearly washed out to sea” arising from heavy rainfall.

“Feed is virtually gone. It is unprecedented that a winter would be so long and so wet. We have had gales, snow and floods. We have had everything thrown at us. The ground conditions out there for cattle farmers, for tillage farmers for beef farmers is untravellable at this stage.”

Cllr O’ Sullivan says that a number of farmers have spoken to him about coping with the fodder crisis.

“I would say to farmers ‘Keep in contact with people whether it is a brother, sister or whatever it is. It is a pressurised situation. Animals may be hungry. A farmer has a close relationship with his animals. When they are suffering he is suffering.”

Cllr O’Sullivan adds that this the longest winter in living memory.

Cindy O’Shea, regional director of the Cork branch of the Samaritans (116 123 (freephone) or text 087 2 60 90 90) has urged farmers who are feeling anxious arising out of the fodder shortages to get in touch. Macra na Feirme has also urged farmers not to suffer in silence, stressing that speaking to a friend or neighbour can help ease the mental burden.