Thousands of tonnes of fodder to be delivered to Ireland 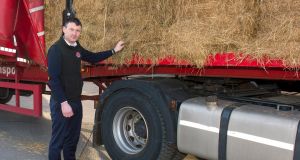 Seamus O’Mahony in Rosslare with Dairygold’s first shipment of 2,500 tonnes of imported fodder from the UK. Photograph: Nicola Reddy

One of Ireland’s largest haulage companies says it expects to use 200 trucks to import 7,000 tonnes of fodder over the next fortnight.

Nolan Transport estimated it will have collected 80 loads of fodder from the UK by Friday night, and all loads are expected to be in Ireland by Sunday evening. Each load is 20 tonnes.

The haulage company, which is based in Co Wexford, is acting on behalf of the Dairygold co-ops in Ireland.

Manager Kevin Fitzharris said he expected to be transporting fodder for the next fortnight from the UK, and could deliver up to 7,000 tonnes in that period.

The fodder will be distributed to Dairygold’s farmers via the branch network across the Munster catchment region. It will be made available at cost price to members of the co-operative.

The extraordinarily cool temperatures of recent months and the protracted winter weather has caused the worst fodder crisis since 2013.

Minister for Agriculture Michael Creed this week allocated €1.5 million towards the introduction of an importation scheme which his department claims will reduce the cost of fodder by one-third.

It will cover all forage introduced into the country between April 5th and April 30th, and will facilitate the importation of up to 20,00 tonnes of fodder into the country.

On Friday, Mr Creed defended the Government’s handling of the fodder crisis, insisting they were dealing with a “dynamic situation which is changing on an almost weekly basis”.

Speaking to farmers during a delivery of fodder at the Dairygold Co-Op in Millstreet, Co Cork, Mr Creed said every effort was being made to remedy the situation.

However, IFA president Joe Healy said farmers could not afford to pay for the fodder they have already purchased.

Mr Healy reiterated his call on the Minister to suspend all on-farm inspections while the crisis is ongoing, and to fast-track outstanding payments to farmers.

Fianna Fáil agriculture spokesman Charlie McConalogue on Friday called for the fodder import subsidy scheme to be made available through all co-ops as well as private feed merchants.

“The scheme is inexplicably confined to the dairy co-ops, and excludes mart co-ops as well as private feed merchants. This means that many parts of the country which do not have a strong dairy co-op network will struggle to avail of fodder through the scheme.

“In particular, the Minister’s decision to confine the subsidy to dairy co-ops would disadvantage those in the suckler and sheep farming sectors that are also under massive pressure to source scarce fodder to manage livestock through the next few weeks.”

Mallow dairy farmer John Buckley said the situation was as bad as he has ever seen it. He farms dairy cattle on 140 acres.

“The grass I have looks like it has been burnt. It looks scorched and ready to be reseeded. What has caught us out has been the extra long winter and the severity of it. The winter has been stretched at both sides.”

Lakeland Dairies, based in Killeshandra, Co Cavan, has more than 1,000 tonnes of fodder currently en route from the UK, along with fodder already supplied to farmers which Lakeland Dairies has already sourced in Ireland North and South.