Making the best of the ever-changing bounty of Atlantic flotsam 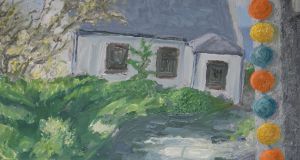 Trawler balls at the house at Thallabawn. Illustration: Midhael Viney

Strings of brightly coloured trawler balls hanging from the pillars of our woodshed were a cheerful punctuation to the bleaknesses of winter and looked gayest of all in the snow. A playful conceit, they solved the problem of what to do with so many in the first place.

In my early years of beachcombing, gales regularly delivered these football-sized floats to the strand, torn from their trawler nets somewhere out at sea. Spheres of immaculate plastic, a hole through the middle for a rope, they were made by their Nordic manufacturers in lovely warm colours – oranges, yellows, reds – to gleam among the chill Atlantic waves.

Flawless, expensive-looking, they were just too attractive to pass up. Eventually I just had too many along the garden path and rolling about in the wind. I was also to see them on slopes of the Inishkea Islands, scattered like snooker balls across the grass.

On our own long strand at Thallabawn, the siege of plastic has greatly depended on the losses – or discards – of trawler fleets far offshore. There have been great tangles of torn net, woven of tough polypropylene, enough to truss and drown a host of whales and dolphins.

In the constructivist era of my smallholding, my first test of flotsam was what it might be used for. A stretch of net would hold down the plastic on a rick of turf; a thought also shared by neighbours, their tractor tracks often ahead of me along the tideline.

What set me going on this, apart from guilt about my cumulative usage of plastic (a polytunnel, for goodness sake) has been a fascinating study of Atlantic flotsam by Dr Don Cotton, published in the current volume of the Sligo Field Club Journal (editor: jpforan@gmail.com).

The journal itself has sprung from a rich tradition of field archaeology, but Dr Cotton is an ecologist with a notable natural history website at the Sligo Institute of Technology (https://iti.ms/2uw367s). His history of marine debris along the Sligo coast adds to knowledge about biological drift – floating organisms attaching to flotsam and arriving in the wake of storms.

Some debris has been quite enormous. Early last year, for example, the wreck of a homemade boat washed up at Trawalua strand was covered in live goose barnacles. It was the skeleton of a Cuban refugee craft, stuffed with polystyrene foam and plastic water bottles.

Even bigger was a Norwegian barge, 90m long and weighing 1,800 tonnes, that drifted on to a strand at Cloonagh in March 1994. Empty of cargo, it had broken free of its parent ship somewhere off the coast of Newfoundland. By Dr Cotton’s calculation, it had travelled 2,874km in less than 82 days, a speed of 35km per day.

Along with military oddities, among them a sonobuoy dropped into the ocean by a US aircraft to listen for submarines, and a huge, black ship’s fender for refuelling a Russian submarine at sea, has come “a disproportionate amount” of rubbish from commercial fishing. Most of it was only too familiar: not only the examples I’ve listed, but Canadian fish tags and “light sticks”, plastic tubes holding chemicals that glow in the deep to attract squid to the hooks of long lines.

The litter of washed-up plastic began after the mid-20th century. But centuries before then, the arrival of “sea beans” (buoyant tropical seeds) on Ireland’s west coast offered clues to the drift of the Gulf Stream and north Atlantic currents.

Comparing the journey times of modern objects, Dr Cotton has a better idea of how long seeds and fruits may spend in the sea. Some messages in bottles have made fast transatlantic voyages: the record for Sligo came in 1987, when a high-riding, wind-catching plastic bottle made it from St John’s, Newfoundland in 127 days – an average daily speed of 24.6km.

A seed travelling from the Caribbean to Sligo might “comfortably” make it, he suggests, in less than a year – “assuming that it didn’t get caught up in the north Atlantic tropical gyre!” And there, of course, it would disappear into a garbage patch of plastic some hundreds of kilometres across.

On the strand at Thallabawn, the tide of plastic is constantly renewed, but manages, in turn, to disappear beneath the sand. One could visualise a virtually imperishable stratum of the stuff, but the grinding and sorting of storms must mill it into fragments, eventually adding to the microscopic alien particles that now permeate the whole of ocean life.