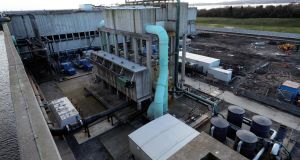 Irish Water is spending €400m upgrading the Ringsend Wastewater Treatment Plantwhich which is due to be completed by 2025. File photograph: Maxwell Photography

Uncertainty and persistent delays in Irish Water’s delivery of critical wastewater infrastructure are undermining confidence and prolonging health risks for the public, according to the EPA.

These range from Ireland’s largest treatment plant at Ringsend in Dublin to smaller towns and villages where wastewater is significantly impacting on the local environment or creating a health risk.

The report says just 44 per cent of wastewater from Ireland’s large urban areas was treated at plants complying with EU standards – up from 42 per cent in 2018 but far below the EU average of 81 per cent.

The main factor in Ireland’s poor compliance is the failure at the Ringsend plant which treats almost half of the country’s urban wastewater, it notes. The problem is putting pressure on Dublin Bay, heightening pollution risk and contributing to poor quality bathing water.

Two years ago, Irish Water advised it would provide necessary treatment infrastructure by the end of 2021 for 30 of the 35 areas discharging raw sewage into waters including coastal areas, estuaries and rivers. “It has now revised this down to just two areas, resulting in significant delays in bringing projects to completion,” the report finds.

In addition, “critical assessments are being delayed which are needed to inform Irish Water’s investment plans”.

Irish Water defended its rate of progress, pointing out last year seven areas were brought into full compliance with EU standards; in 13 locations treatment works were upgraded or new plants were provided, and in two others raw sewage discharges were stopped. Five sites were removed from an European Court of Justice (ECJ) list of inadequate facilities, and 60km of sewers were rehabilitated.

However, director of the EPA’s Office of Environmental Enforcement Dr Tom Ryan criticised the slow progress on delivery of projects.

Irish Water was failing to treat wastewater to national and EU standards and falling far short of its own targets to comply with these standards, he said.

The Ringsend plant repeatedly failed treatment standards because it did not have adequate capacity – Irish Water is spending €400 million upgrading the facility which is due to be completed by 2025.

“These works must be a priority for Irish Water and will be closely monitored by the EPA,” said EPA programme manager Andy Fanning.

There was no clear plan to improve treatment at 23 areas where wastewater was a significant threat to waters at risk of pollution, he said. “Irish Water must clearly identify when and how it will resolve the issues at these areas and plan improvement works as early as possible.”

While the EPA accepts it is not possible to fix all problems in the short term, and resources must be directed to deliver essential improvements where most needed, it highlights:

– 48 areas where wastewater is the main significant threat to inland and coastal waters at risk of pollution (down from 57 areas the previous year);

Sewers should have enough capacity to collect and retain wastewater during normal local weather conditions including seasonal variations in wastewater load, the EPA report says.

“Storm water overflows should only trigger in extreme rainfall, and should not be used in normal conditions to compensate for a lack of sewer capacity,” the report warns. Discharges from storm drain overflows have been a recurring problem in Dublin Bay in recent years.

“We expect Irish Water to react promptly to any emergency overflow event and take all steps necessary to mitigate risks to the environment,” it adds. The EPA prosecuted the utility in 2019 for failing to respond appropriately to an emergency overflow of untreated sewage into Malahide marina.

The problem is being exacerbated by “a considerable shortage of information on the condition and performance of many systems”. Irish Water does not have enough data on the volume of wastewater discharged into the environment from collection systems each year, it concludes.

“It will take substantial work and significant investment over several years to build up the necessary understanding of the condition of Ireland’s collection systems and to fix deficient systems.”

“We are always striving to prioritise the best possible service improvements, while maximising value-for-money with funding available,” Irish Water managing director Niall Gleeson said. He added progress across a portfolio of projects was slower than anticipated “as we deal with an unprecedented level of statutory and planning issues”.

The list of projects and programmes was continuously being refined based on new and emerging needs, and subject to budget, technical and environmental constraints, as well as statutory approval, he said.

“Delivering new infrastructure where it never existed presents a range of challenges – from competing investment priorities, to community support, to planning consents in addition to land acquisition which can take to up to two years for just one project,” he said. “There is a concerning upward trend in the number of acquisitions subject to CPO orders which remains a last resort.”

Despite some delays Irish Water expects to start work next year in 12 more communities where raw sewage is being discharged, with the work in the majority of remaining areas to start in 2022 and 2023.

“Delivering the critical wastewater infrastructure to meet the needs of our growing population remains a challenge that requires significant investment and extensive engagement which will take years to fully address,” Mr Gleeson said.

The report is available here.