Reuse it or lose it: turning Ireland into a no-waste economy

The pop-up, Library of Things, has opened in the Dublin's Food Co-op for the month of October as part of National Reuse Month. 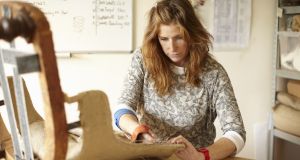 The European Commission’s Generation Awake campaign, “I am not trash – I have inner values”, says it all. If finite natural resources were central to manufacturing, products would be durable, repairable, harvested for their parts and recyclable. But in this 21st-century consumerist society, most products are not made to last or be repaired and/or reused.

As Ireland struggles to deal with high levels of waste, the three regional waste authorities are encouraging us all to reconsider our wasteful ways by designating October as National Reuse Month. Now in its second year, the initiative encourages people to partake in upcycling and repair workshops (see rediscoverycentre.ie/events and zerowastecashel.ie for examples), join lending schemes and swap things they no longer need.

There is even an upcycling challenge organised with FreeTrade Ireland (freetradeireland.ie), with €1,000 prize money in each of the three waste regions (Southern, Eastern-Midlands and Connaught-Ulster) for the best upcycled object (the closing date for entries is October 16th at 5pm). Upcycling is the transformation of unwanted products into items of better quality.

In many ways, we are one or two generations at most away from more careful consumption, but with fast fashion (more than half of new clothes bought are chucked away within a year of production) and short-life furniture such mainstream lifestyle choices now, it takes courage and conviction to be less wasteful.

Marion Weymes is one of the organisers of the Library of Things at Dublin Food Co-op, Newmarket Square, Dublin during National Reuse Month. A Library of Things gives people the opportunity to borrow items only needed on an occasional basis while allowing other people to donate or loan household or hobby items that they don’t use.

“There’s a Library of Things in a shipping container in London and lots of tool libraries in the United States so we’re test-running it here,” says Weymes, who is a researcher on the Share City food-sharing research project at Trinity College Dublin.

“There are always some things I need and don’t have – for example, a steam cleaner or a power drill, and then other people end up with all sorts of stuff that they don’t use often. I’d like to see policymakers and Dublin City Council support more initiatives like this,” says Weymes.

Claudia Tormey from Voice Ireland hopes that the initiative will make people think more about buying better-quality things that they can pass on when they are finished using them.

Weymes acknowledges that for projects such as the Library of Things to take off, it needs to be easy for people to share. Sharing libraries need to be open at convenient times, within walking distance, and the goods need to be reliable and in good repair.

Bernie Brannick and Eoghan Parle from We Share social network are also involved in the Dublin Library of Things. “We share skills, items, time, ideas and knowledge on the basis that if everyone contributes, you’ll get what you need from the community by paying it forward,” explains Parle.

Everything from bicycle repairs to musical instruments and yoga classes have been shared on the social network (weshare.ie). “There’s a huge difference between giving and selling something. It’s good for your soul to gift things and it also allows you make connections with other people,” says Parle.

Brannick also set up fallingfruit.ie, an initiative in which people pick and share surplus fruit in private gardens for owners that can no longer do so themselves. “It’s a chance for people who can’t cope with the amount of produce they have and don’t want to see it going to waste,” explains Brannick.

Claire Downey, national co-ordinator of Community Reuse Network Ireland, says that for reuse to be mainstreamed in society, people need to be more confident of the quality of second-hand goods. The network of almost 450 charity shops are where most people buy second-hand clothes, books, furniture and household items in Ireland.

“We are currently piloting a quality standard for second-hand goods in Ireland, and we know that less than 5 per cent of all goods are reused, so there is a lot of scope for growth,” says Downey.

“Our vision is for an Ireland where the word ‘waste’ doesn’t exist and where our entire community benefits from the social, environmental and economic value of all reusable resources,” she adds.

Clodagh Kelly has been organising clothes swapping events with her friends for the past few years and will host a public “Swapsie” in the Dublin Food Co-op on Saturday, October 14th from noon to 4pm.

“It gives people a chance to re-home pre-loved clothes while expanding the longevity of the clothes. It also encourages people to think about slow fashion, reuse before recycling and the circular economy in a sociable way,” says Kelly.

Having a dedicated reuse section in local authority recycling centres is something that is taking off in some areas. The three regional waste authorities aim to have up to 10 per cent of what’s brought to recycling centres reusable or “prepared for re-use” within five years.

“Some civic amenity sites are doing this with bicycles and furniture captured for reuse. But, we’d like to see electronic items and paint also streamed for reuse. We get lots of older phones, digital pads and huge volumes of paint which could be reused,” says Pauline McDonagh, waste prevention officer with the Southern Waste Regional Authority.

And finally, in an innovative way to encourage the public to interact more with their local recycling centres, the Community Reuse Network will host storytelling tours with local historians, storytellers, product experts and innovators at recycling centres.

“We are asking people to drop off quality donations and community heirlooms to their nearest recycling centre for these Story of Things tours. The storytellers will talk about the life-cycle of objects from the resources used to make them to how they were reworked for reuse,” explains Downey.