Plans for more than 3,500 Dublin homes set for approval by council 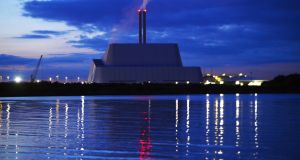 Poolbeg peninsula: most sites in the Docklands zone, which borders Poolbeg, are already under construction. Photograph: Cyril Byrne

Final plans for the fast-track development of more than 3,500 apartments on the Poolbeg peninsula’s new Strategic Development Zone (SDZ) will be presented to Dublin city councillors for approval on Monday.

The council has been preparing plans for the new urban quarter, which will provide homes for up to 8,000 people , since it received cabinet approval for the project in May 2016.

A quarter of the homes will be reserved for people on the social housing waiting list. The apartments will be built on the 15-hectare combined site of the former Glass Bottle Company and Fabrizia lands, both of which are in receivership. Most of the remaining lands in the 34-hectare zone are owned by the Dublin Port Company.

Councillors have zoned part of the port company’s lands for “mixed use”, which would allow commercial and “creative industries” on the land as well as port activities. This would enable the use of the land for “film, TV and digital content production studios”, the council said.

Dublin Bay Studios, headed by Windmill Lane Studios founder James Morris and film producer Alan Moloney, had lobbied the council to set aside land for the development of an €80 million studio complex.

However, council chief executive Owen Keegan has said specific reference to Dublin Bay Studios should not be included in the planning scheme as it “may be interpreted as limiting all ‘Creative Industries’ to that of a single business entity”.

The construction of a film studio on the land would require the agreement of Dublin Port. The company said it plans to retain its lands for port-related uses.

One the strategic development zone is approved by councillors there will be a four week period during which appeals against the scheme may be lodged with An Bord Pleanála.

However, once the zone is adopted, the council will have the power to grant planning permission that cannot be appealed to An Bord Pleanála. Landowners could secure permission for their sites within two months of submitting their application to the council.

Dublin already has three strategic development zones: Adamstown in South Dublin which was approved in 2003, as well as Cherrywood in the Dublin Laoghaire/Rathdown area, and the Docklands SDZ, both approved in 2014.

The Cherrywood scheme is only now getting off the ground, with two applications recently submitted to Dún Laoghaire-Rathdown County Council. However most sites in the Docklands zone, which borders Poolbeg, are already under construction.