The native Irish honeybee is not extinct after all 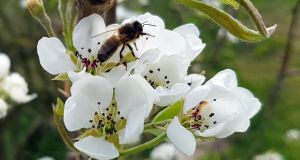 The pure native Irish honeybee is not extinct as previously feared and is living in many parts of the island of Ireland, a post-graduate research student has established using genetic testing.

Irish bee populations have experienced a sustained decline over many decades, which necessitated the importation of bees, often bringing diseases. But news that Apis mellifera mellifera – the pure native Irish honeybee – still exists has brought a fillip to beekeepers.

Jack Hassett, who is pursing his doctorate at Limerick Institute of Technology, used DNA analysis to deduce that millions of the native black Irish honeybees are living in at least 300 hives throughout the country.

“It’s a fantastic result, especially for all the different beekeepers around the country who’ve been trying to preserve the native Irish bee. We sampled 300 hives from 80 sites,” said Mr Hassett, who is from Thurles, Co Tipperary.

Previous methods of testing bees, including measuring wing and body length, were “not as exact as DNA analysis”, he added.

It was commonly presumed the Irish bee died out after a disease outbreak in the 19th century devastated the native English bee, which also falls under the Apis mellifera mellifera categorisation.

Mr Hassett’s work shows that while the black bee should still be considered endangered, there are enough of the pure native honeybees in Ireland to not only ensure its survival but it could help repopulate northern Europe, where the majority of Apis mellifera mellifera has died out or been hybridised.

“We have found that not only are these black bees a pure form of Apis mellifera mellifera, but they also have markers specific only to Ireland. The vast majority of the DNA samples taken showed greater than 95 per cent purity for Apis mellifera mellifera; the native honeybee for northern Europe and Ireland,” he said. “The study exceeded all our expectations, and has excited beekeepers across the continent. It has belied the myth that there is no native Irish honeybee in existence.”

A worldwide decline in honeybees led to concerns about their essential pollinator role and the potentially drastic impact their loss may have on the quality and diversity of foods.

“However, this new study proves Ireland now has potentially the greatest reserve of Apis mellifera mellifera in the world; the honeybee that dominated all northern Europe.

“It is imperative that we act now to protect this unique population that has adapted on this island over thousands of years. The distinctive Irish population has been under threat from the importation of queens and hives, and this practice has to stop if we are to prevent destruction of our unique honeybee through hybridisation and disease,” he added.

Botanist Prof Jane Stout of TCD said it was “a really interesting finding”. The European honeybee, Apis mellifera, is the most common honeybee species worldwide, and there are around a dozen subspecies found across Europe. The subspecies Apis mellifera mellifera used to be widely distributed across northern Europe but it has been lost, interbred and/or replaced with other subspecies across much of its native range.

“It is interesting that the Irish bees tested in this study were shown to be overwhelmingly ‘pure’ Apis mellifera mellifera – either there have been fewer attempts to interbreed with or establish other subspecies here, or it is better adapted to our environmental conditions. Whatever the case, Ireland appears to be one of the few places where this subspecies has persisted,” she added.

The fact that Ireland appears to be a refuge for this subspecies, and our honeybees are genetically distinct, does not automatically mean they can repopulate depleted stocks in other parts of Europe – they may be better suited to our Atlantic conditions, she warns. “It does mean that we should have good biosecurity with regards to honeybee imports – both to protect the genetic integrity of native populations, and to reduce disease spread.”

Her views were echoed by ecologist Dr Úna Fitzpatrick of the National Biodiversity Data Centre and chair of the All-Ireland Pollinator Plan, which attempts to maximise opportunities for pollinators such as bees, especially as a third of bee species are threatened with extinction. It was “fantastic news”, she said, as for a long time it was believed the Irish honeybee was extinct or did not exist pure form.

Mr Hassett has working on under the guidance of Dr Elizabeth Moore, an expert in genetics and biomolecular forensics, and Dr Michael Geary, an analytical scientist and beekeeper of 15 years.