Michael Viney: The false widow spider is not dangerous, but ...

On walls and boundary railings of Lucan’s public park, 54 were counted on one visit in July 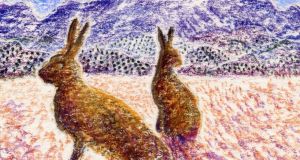 The brown hare was first brought to Ireland from Britain for coursing in the mid-19th century. Drawing: Michael Viney

A column that brackets a hare with a spider could hint at an echo of an Aesop fable, but when both are invasive aliens to Ireland, facts are what we need.

In very different ways, both Lepus europaeus and Steatoda nobilis threaten Irish wildlife, along with, in the latter’s case, some disquiet for urban-dwelling Homo sapiens.

The stories of the brown, or European, hare and the false widow spider unfold in separate papers in Biology and Environment, the research journal of the Royal Irish Academy. The first deals with the prospects of limiting the long-eared hare, the second with the seemingly inevitable spread of the island’s new venomous spider.

The hare first, since it lets me use a drawing of hares I once watched in sunny Provence, rather than an arachnid I’d much rather you googled for yourself.

The brown hare was first brought to Ireland from Britain for coursing in the mid-19th century but, more recently and crucially, to Northern Ireland around 1970. More than half the hares in mid-Ulster are now of this European species, numbering perhaps 2,000 and trebling their range between 2005 and 2013.

Conservation of the Irish hare, Lepus timidus hibernicus, is now a priority in the North, having suffered a long decline in the last century. After 28,000 years of Irish residence, its identity is threatened by progressive hybridisation with the brown hare.

The alien and invasive false widow spider is not its dangerous Aussie cousin, the black widow, but the findings on its spread are still startling.

The chance of such genetic extinction has alarmed Prof Ian Montgomery and Dr Neil Reid, animal ecologists at Queen’s University Belfast. They have urged early “management” – to probably include shooting – to stop it happening. Their new paper is written with Dr Anthony Caravaggi, who measured the brown hare’s expansion, and reports on a test of public acceptance of “lethal control” of the aliens.

Managing wildlife is, as they say, “often a contentious issue in which stakeholders are increasingly influential”. They circulated a questionnaire to members of Countryside Alliance Ireland, who, numbering many shooters and field sports supporters, proved markedly more open to killing brown hares than were responses from people outside the alliance. This perhaps unsurprising result calls for more work to develop “mutual understanding”.

The alien and invasive false widow spider is not its dangerous Aussie cousin, the black widow, but the findings on its spread are still startling.

If its reproduction in the wild matches performance in the laboratory, its long life and year-round activity could help make it a dominant Irish urban spider.

Steatoda nobilis is already somewhat feared in Britain, where it arrived with bananas from the Canary Islands or Madeira and was first recorded in 1879. A small, brownish spider, with orangy legs and variable cream markings on a bulbous body, it is not aggressive to humans.

Handled, however, or trapped in clothing, the adult female, about a centimetre long, can sting like a wasp and raise a substantial swelling. As the RIA journal’s editor, Prof Bruce Osborne of UCD, remarks, it can “give you a nasty bite that could become infected if not properly treated”.

Ireland’s first report was from Bray, Co Wicklow, in 1999. The new study in Biology and Environment was part of a wide survey of alien insects and spiders, using a student team and mounted by NUI Galway.

Along with many online reports, verified with photographs, they identified the false widow in 54 separate locations across 16 Irish counties.

The international spread of the spider has been continuous since the start of the century. In western Europe, California and Chile it is widespread in major port towns, a pattern echoed in the Irish survey, on eastern, southern and western coasts, with a few other colonies on major midland transport routes.

On walls and boundary railings of Lucan’s public park, 54 were counted on one visit in July.

The largest populations were found in greater Dublin. Over 18 months, 620 specimens were obtained from a single row of semi-detached houses in Lucan, in and around garden sheds, along garden walls and on outdoor furniture. On walls and boundary railings of Lucan’s public park, 54 were counted on one visit in July.

In their new, northern range, the spiders are closely associated with human structures and activity (synanthropic is the scientific term), and seem generally absent from the open countryside. Nearly all the non-native spiders now established in Europe also live synanthropically, perhaps for urban warmth.

Whatever about a rare bite for humans, the spider’s predatory appetites and vigorous reproduction could out-compete native urban spiders. It can live for 5½ years, compared with the 12 months averaged by the native Zygiella x-notata, a rather similar-looking spider that spins webs outside house windows.

The false widow also produces bigger egg sacs, averaging 100 eggs, and unlike Zygiella is active even in cold weather. In the survey, spiders captured outdoors in the middle of winter produced viable egg sacs after only days in the laboratory.

Please do not email me photographs of putative Steatoda nobilis – or anything at all in a matchbox.